Dennis Farina passed away at the age of 69, the result of a blood clot in the lungs, Mr. Farina was admitted at a Scottsdale hospital in Arizona after suffering from pulmonary embolism. He is survived by his three sons from his marriage to Patricia Farina and his beloved girlfriend Marianne.

When  Patricia became a mother of her three boys, Dennis was not an actor but a police detective in Chicago, she was a stayed home mom, and a very good one, It is unknown why or the exact date Patricia and Dennis got divorce but media reported that it was in the 80’s.

Her sons grew up to be three wonderful sons, professionals, husband and now fathers. We can’t tell you who are the beautiful wives and gorgeous children of Michael and Dennis Jr. but we sure can tell you a little bit about Patricia’s youngest child.

Joe obtained his B.A in Psychology in 1995 from DePaul University, he holds a certification in radio and Television from the Illinois Center for Broadcasting.

Joe Farina who like we mentioned before is an actor, in 2005 he had a small part in the Weather Man, the following  year he starred as Patrick Fitzgerald the US attorney in the documentary Triple Cross: Bin Laden’s Spy in America.

From 2007 until 2010 he had small roles in the short video The Swing, and Len Austrevich’s 2007 comedy Chasing Robert, he was a rep for Pepsi named Kevin in the 2008 film The Promotion and became Captain Bill Bogdanski in RiffRaff, in 2010 he worked in two films Not another B Movie as a bartender and in the t.v movie Debt of the Heart as Joseph Saunders.

This year proud momma Patricia saw her son become a handsome cop in the t.v series Chicago Fire, she will be seeing him in the short  Strapped and as Officer Becker in Caretaker. He and editor and writer Heather Farina formerly known as Heather O’Donell got married on April 16, 2005. 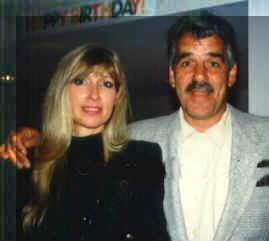 As for Dennis farina’s ex-wife we can tell you that 68-year-old Patricia A. Farina was born on May 12, 1945, she lived Leonard, Drive in Norridge, IL so far five of her grandchildren are actors Eric, Michael, Matthew, Tyler, and her granddaughters Brianna and Olivia are also actresses.