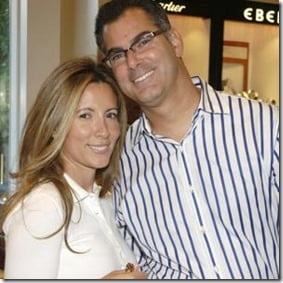 The life of the rich! What is to have money when you can’t fight for your dogs well being right!! If you belong to the upper east side in New York City you might know the couple in the picture. Now don’t worry they are not getting a divorce, they did not kill anybody, they are not being investigated by the FBI or committed any acts of terrorism; what we have here is major breakdown in 47-year-old and major top executive Adam Silberman.

Silberman who is the president and managing partner at Solas Investments, allegedly jumped from his out the seventh-story window of their Fifth Avenue co-op and landed on a second-floor balcony just after 10 a.m. Sunday, according to police and family. He was in critical but stable condition Monday at New York-Presbyterian Hospital Weill Cornell, police said.

This is one of those: What was he thinking?? Well he was thinking about having to leave his ritzy pad; the one he’s been leaving in for the past 25 years with his gorgeous wife Monique Ender Silberman and their three pooches!

The well renowned banker who possess an impressive resume, going from president at AMMS LLC, president/owner at Natural Break LLC, and finally president and managing partner at Solas Investments LLC apparently took it the hard way when he was noticed that because of his beloved dogs he needed to move out! The news was given by his father in law who said the co-op board was trying to boot Silberman and his three white toy poodles out of the building near E. 68th St., because the pooches were bothering other residents!

Monique’s hubby apparently couldn’t deal with it? And after trashing his bathroom he decided to take the leap! Can you imagine he could have died! Monique’s husband Adam who’s personal interest include boating, shooting, food, luxury sector, retailing and of course real estate gave his family the scare of their lives!

The power couple both share an interest for real state since gorgeous Monique is a high-powered real estate broker, she is the daughter of Paul Ender. We found a profile where she is listed as one of town real state’s representative that you can look at here. Monique was seen hanging out at the hospital to check up on her miraculous survivor husband.