Volodymyr Zelensky his name on Servant of the People, a Ukrainian comedy show that follows the life of an every man schoolteacher who unexpectedly becomes president and takes on the nation’s oligarchs.

Beating the odds and with close to zero political experience, Volodymyr struck a populist, anti-corruption message during his country’s presidential campaign that clearly resonated with millions of Ukrainians suffering from poverty and government graft; ultimately placing him on the top. He won with a staggering 73 percent of the vote.

Widely known as ‘Ze’ Zelensky was born in the city of Kryviy Rih on January 25, 1978. While he was growing up, for four years he lived with parents in the city of Erdenet, Mongolia. His family returned to Kryviy Rih where he studied at school No. 95 with extensive English learning. In 1995, he entered Kryviy Rih Institute of Economics, which is part of Kyiv National Economic University, where he received a law degree.

The showman and actor gained popularity in 1990s thanks to a highly-acclaimed KVN stand-up TV show. He was a member of various teams until he skyrocketed to his first big standup success with the launch in 1997 of a 95 Kvartal team. His program became the highest rated on Ukrainian TV in a comedy segment.
Zelensky along with his partners launched a number of other successful TV projects. In addition, he’s had a number of roles in films.

As of March 2022, and according to Celebrity Net Worth  Ukraine’s president Volodymyr Zelensky has a net worth estimated at $1.5 million.

It is believe, Volodymyr Zelensky’s annual salary is $11,200. 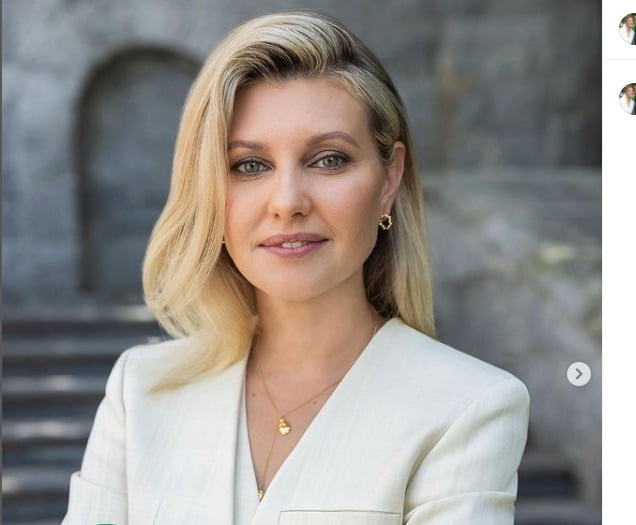 He and wife, Olena Zelenska have been married for 16-years. Olena and  Volodymyr Zelensky were schoolmates, but at the time they did not know each other. They got acquainted much later – while in college. Olena studied at the Faculty of Civil Engineering at Kryvyi Rih National University.

The two began dating and had a long courtship that lasted nearly a decade. They were in a relationship for about 8-years prior to their marriage on September 6, 2003.

Since their nuptials the couple has welcomed two children. Olena Zelenska gave birth to a daughter Oleksandra on July 15, 2008 and to their son, Kyrylo was born on January 21, 2013.

Olena Zelenska was born Olena Kiyashko on February 6, 1978, in  Kryvyi Rih, Ukrain. She attended  the faculty of civil engineeriong at  Kryvyi Rih National University where she studied architecture.

Despite having a degree in architecture, Olena never worked in the profession. Instead, she helped her husband create stand up performances for the KVN comedy show. She later became one of the authors at the Kvartal 95 Studio. Though married to a celebrity the gorgeous blonde enjoys keeping a low profile -most likely reason why she opposed her husband’s run in the beginning. Since becoming the first lady however, she’s made a number of public appearance, including the cover of Vogue Magazine, the Ukrainian’s Women’s Congress.

On January 13, 2020, her husaband added her name to the board of directors of the Art Arsenal; in August 2021, started the Kyin Summit of First Ladies and Gentleman.

She tested positive for COBID-19 on June 16, 2020 and had to be hospitalized to treat a moderate infection, she went home on July 3rd where she co0mpleted a treatment to treat her bilsateral pneumonia.