Zacari Nicasio pulled a Kanye at Wednesday’s People Choice Awards while the beautiful cast of The Talk were giving their acceptance speech, he was kicked out by Sharon Osbourne who kicked Nicosia in the **** and Sheryl Underwood called for security before she send him a warning “You ain’t going to pull no Steve Harvey up in here.” 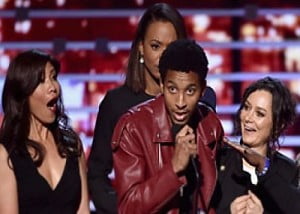 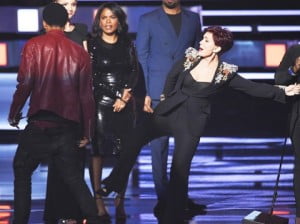 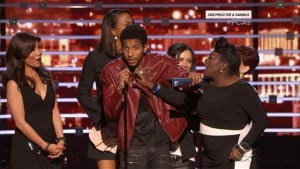 “My name is Zacari Nicasio. Shoutout to Kevin Gates … Yeezy jumped over the Jumpman, yes sir,” he said.

L.A police handcuffed him but then they released him, but who is this Zacari Nicasio?

18-year-old Zacari Nicasio from L.A is a professional skateboarder who began the sport at the age of 13 when he got his first skateboard as a birthday gift, he feels inspired by pro skaters like Travis Pastrana and Stevie Williams. He trains in Venice Beach. This is from his biography..

Zacari has a driving passion and is dedicated to the art of kickflips, grabs and aerials. Skateboarding is his passion, his true motivation to rise, work hard and come up through the ranks, to be a world-class athlete. His journey began at the age of 13, when he was introduced to skateboarding and was given his first skateboard as a birthday present. Since, it’s been a non-stop dedication to the “grind” of skateboarding. Even though Zacari is still young, he has set a standard and has dedicated himself to being a world-class competitor.

Zacari wants to replicate their drive, passion and love for skating and life. Zacari wants to model their domination of skating and business ventures. He will “become a professional skater and I want to be involved in everything else skateboarding has to offer.”

Nicasio who also crashed Bruce Jenner’s 60th birthday party bash said he crashed the stage to tell everyone who he was.

“I had to shout out who I look up to: Kanye West and Kevin Gates,” Zacari told media. “I came here to do this tonight. I could honestly care less about what was going to happen.”