Amanda Morris is a 24-year-old NY resident who was randomly attacked by a man while she was on her way to work Wednesday morning.

According to reports the pretty young woman, was headed to work at 6:00 AM, she was walking on Seventh Avenue in Manhattan when she became aware of a ‘suspicious’ man ahead of her.

She told authorities, the attacker had slowed down to let her pass him but turned and lunged at her, slashing a blade across her face.

Out of the blue and without no reason, the guy, viciously attacked her and cut her face in an attempt to ‘scar her for life’ she says. 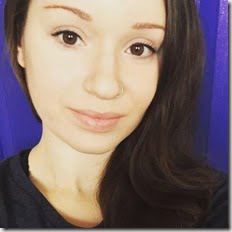 Covered in blood, Amanda Morris ran into a nearby 24-hour Malibu Diner on Seventh Avenue near West 24th Street for help.

Amanda Morris was hospitalized with injuries to her face, but survived the assault. She was given seven-stiches. Later on Wednesday she wrote on Facebook

Today was a difficult day that I never thought I would have to go through, I was simply in the wrong place at the wrong time and put in an unfortunate situation, but I would like to do what I can now to raise awareness. I was attacked by a stranger on my way to work early this morning. I was slashed on my face with an unidentifiable object (thought to be a razor / box cutter). It was unprovoked and I did not have any association with this man prior to the incident, we have never seen each other before. The NYPD was able to find street footage of the man but we are unable to make out his face at this time.

Amanda Morris also shared several photos of her injuries and described her attacker as a: 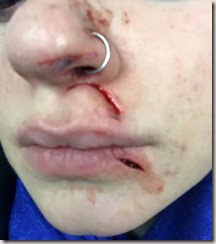 The attack was caught on video. The footage shows her attacker was a black male. The man was identified by the NY Daily News as 41-year-old Kari Bazemore. 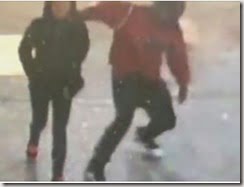 Amanda also revealed on social media, she had a bad ‘gut feeling’ about the stranger, who appeared to her to be drunk or on drugs, from the moment she spotted him.

It turns  out, she was right. Bazemore has a lengthy criminal history. He was arrested Wednesday night and charged in the assault of 24-year-old Amanda Morris.

Amanda Morris works at Chelsea Whole Foods. According to her Facebook page, she was born Amanda Lynn Morris on December 26, 1991. She currently lives in Brooklyn, NY. but is originally from Port Hardy, British Columbia.