The 47-year-old is being sued by Linda Fairstein, the former prosecutor who helped prosecute the now-vindicated Central Park 5, over her portrayal on the series.

Born August 24, 1972; the Long Beach, California native is a writer, producer, director and distributor of independent film.
DuVernay went to the University of California, Los Angeles and majored in English and African-American studies. Initially, she set her sights on a career in journalism, but an internship at CBS News quickly changed her trajectory.
Prior to a career behind the camera, Ava Duvernay did film marketing and publicity and in 1999 she started her own publicity firm called The DuVernay Agency and worked with films like “Collateral,” “Dream Girls,” and “Invictus.” Long story short, held onto her day job as a safety net while taking private directing classes. 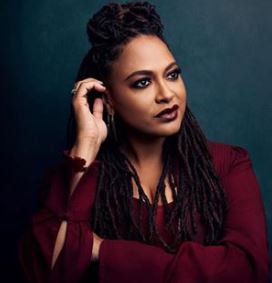 Throughout her career she has received many accolades including Emmy, BAFTA and Peabody Awards and is also an Academy award nominee.
Her directorial work includes the historical drama Selma, the criminal justice documentary 13TH and Disney’s A Wrinkle in Time, which made her the highest grossing black woman director in American box office history.
She’s also behind the critically-acclaimed TV series Queen Sugar, the CBS limited series The Red Line and her upcoming OWN series Cherish the Day.

Despite the many successes to her name, it appears the same can’t be said about her personal/romantic life. Ava Duvernay keeps things super private when it comes to the love front. She’s been romantically linked to musician/actor Common for years -however the two have never confirmed the status of their relationship. Judging by her social media no man appears to be on her radar…for now.