Charlotte Lawrence, the singer, songwriter and model has announced on social media that she tested positive for the deadly coronavirus.

The 19-year-old begged her followers on Instagram to ‘protect those less able to survive this virus’
She also added ‘I am going to be completely fine. But many who get it won’t be if too many people get sick too quickly.’
Unlike many famous celebs, Charlotte spoke like a true expert asking further ‘Stay clean. Stay informed. Stay aware and make others aware. And for the love of god, self f***ing quarantine or you’ll be on my s*** list.’

The teen pop star, described as having a dark edge, has won over fans with viral hits like Just The Same and Sleep Talking. 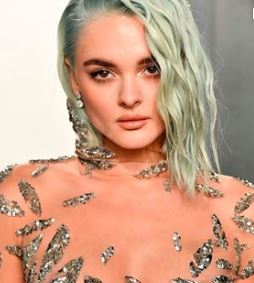 Born June 8, 2000; the Los Angeles native is the daughter of famous parents. Her mother is actress Christa Miller -known for having portrayed a number of sitcom characters, including Jordan Sullivan on Scrubs. And her father is screenwriter, producer and director Bill Lawrence -who created Scrubs.
Her parents were married in 1999, a year before she was born. Charlotte has two younger brothers, William and Henry.

Charlotte Lawrence developed an affinity for music at an early age. She began writing music while still in high school and has spent the last few years writing and recording while finding her musical voice. She specially enojys writing about sad emotions as stated during an interview.
In 2014, she released her debut single, “The Finish Line,” to iTunes. The following year she released her second single, “Ever After,” to iTunes.
In 2019 she performed at venues around the world from now until April as part of the Reckless tour.

Charlotte is also known for being a childhood friend of Kaia Gerber -daughter of Cindy Crawford and Rande Gerber. The teens often appeared hang out and appear on each others social media platforms. Though she appears to be currently single, Charlotte Lawrence made headlines last year when she and Charlie Puth dated for a few months. The romance began in February but by September Puth revealed he was single.
Find Charlotte Lawrence on Instagram here.