Did you know tonight we have the second full Moon in July also known as a blue moon? Well, do not panic, is not as the world is ending or anything like it. If you have no idea what a Blue Moon is, we got you covered, reed below the ten-top-facts about the blue moon! 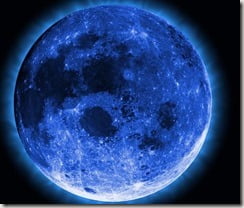 1. A full moon occurs every month.

Every month has a full moon, but because the lunar cycle and the calendar year aren’t perfectly synched, about every three years we wind up with two in the same calendar month.

The July 31st appearance of the month’s second full moon will be the first such occurrence in the Americas since August 2012.

3. Why do we call it blue moon

A blue moon is defined as any time there is a second full moon during a calendar month, according to NASA. While most years have 12 full moons, this year has 13.

4. Tonight’s moon won’t be blue at all

It will be shining in the reflected light of the Sun, as normal, and will appear yellow/white, as normal.

When a moon does take on a bluish hue, it is because of smoke or dust particles in the atmosphere, such as during a cataclysmic volcanic eruption. The most recent blue moon that was truly blue in hue was in Edinburgh, Scotland, in September 1950.

6. The term “blue moon” was introduced by the Maine Farmers’ Almanac, sometime after 1800.

In their definition, the name was given to the third full moon in a season containing four.

In the sense of a rare event, the first use of blue moon dates to 1528 according to the Morris Dictionary of Word and Phrase Origins.

8. Astronomer James Hugh Pruett came up with the modern day usage of the phrase blue moon.

Pruett, a writer for Sky and Telescope wrote “This gives 11 months with one full moon each and one with two. This second in a month, so I interpret it, was called Blue Moon.”

In 1883, the eruption of Krakatoa volcano gave the Moon a bluish tinge for almost two years.

10. When will this lunar event happen again

It will not be seen again until January 2018.