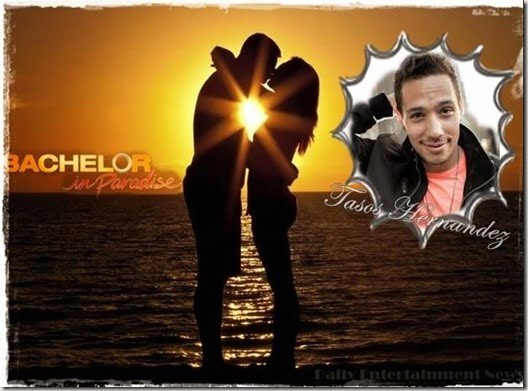 PinAlright so our next guy to pop-up on Bachelor in Paradise might not win the best name contest but his charm, well that’s another competition! Tasos Hernandez firs came to us competing for love with Andi Dorfman on The Bachelorette Season 10 and now he signed up for the fun down in Mexico as he will make his debut on tonight’s episode!

We think is great Tasos is going on Bachelor in Paradise since we didn’t see enough of our Latin DJ this season period — Andi never gave him a 1-on-1, do you think he deserved one?

He was the 13th guy eliminated out of 25 when he did not receive a rose from Andi. The Metropolitan State University grad works as the director of member services at Denver photography joint The Studio, and looks as good behind the camera as in front of it. He’s also a DJ and teaches an after school Spanish program at the middle school where his mom works. Sounds like a dreamy kind of fella! The 6’0″ Hispanic, great smile, wedding photographer/DJ/Spanish teacher is the son of Andrea and Juan and has a brother named Kristos.

Tasos in his long hair days His ABC bio says he also played in band Regret Night. DJ TAZOZ alos had a management company TH Entertainment. It seems like being on TV really is a passion of his?

Take a look at this funny video from his former band

Tasos stint on TV has brought him his fair share of gossip and rumors as well. Back in June, In Touch published an insert photo spread in a recent issue claiming that the 30-year-old Denver guy was gay! “Andi’s Guy Caught in Gay Scandal!” the segment claimed alleging the Latino “out” in his group of friends. He tweeted in response to the gay allegations

Sounds like he’s not taking it seriously, but isn’t super cool with the tabloids writing stories about him.