Phoebe is known to be the granddaughter of Welsh author Roald Dahl and cousin of model Sophie Dahl; she used to be a model herself, but she has launched her own fashion line, Faircloth -a charity minded brand, donating one school uniform to a girl in Nepal for every dress it sells.

She met Ruby during a barbecue last year; Phoebe told the story during an interview saying: “She (Ruby) didn’t want to go out that day, but she loves animals, and she came because someone showed her a picture of my pet pig.”

The Clothing Designer also revealed she was in another relationship at the time they met but says it was love at first sight: “the second I saw Ruby, I completely fell for her.” 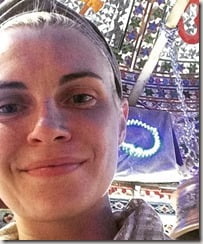 Phoebe is the daughter of British screenwriter Lucy Dhal and Lucy’s first husband Michael Faircloth. She has one sister, Chloe Michaela.

News about the couple began circulating in March last year, about three months later they announced they were engaged.

Most recently, the couple joined forces and have a clothing range called Scallywags that they’re launching this month and its ‘gender fluid, gender neutral brand.’

Phoebe’s gal also keeps busy while shooting scenes from “Orange Is the New Black season three! Ruby plays new inmate and Piper love interest Stella Carlin. 29-year-old Ruby has caused quite the frenzy with her role with loads of tweets saying how gorgeous she is! Think Phoebe might get jealous?