21-year-old Dylann Roof has been identified by the FBI as the man who killed nine people inside a historically black South Carolina church on Wednesday.

According to reports Dylann who is from the Columbia-area was arrested twice this year, charges including trespassing and drug possession. 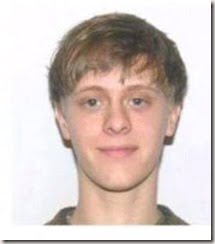 It is unknown the reason why he went on a rampage murdering black people inside a church but his social media images show him wearing a jacket bearing flags from apartheid-era South Africa and what was once white-rule Rhodesia.

The Daily Mail says his family is in shock over Dylann’s doing; one of his relatives admitted that the young man has always been “too introverted.”

Dylann attended White Knoll High School in Lexington, South Carolina. His Facebook page show many of his friends in South Carolina are black. Investigators say he had deleted at least one of his black friends from social media.

On Wednesdays terror, Dylann allegedly entered the church and an hour later he opened fire killing six men and three women. According to CBS affiliate WLTX Roof was apprehended in Shelby, North Carolina.

According to the FBI’s description Roof is 5‘9” and approximately 120 pounds, his getaway car was believe to be driving a black 2000 Hyundai Elantra. license plate is LGF330.