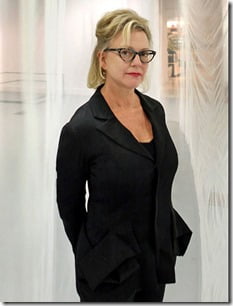 Kay Hartenstein was born on Valentine’s Day 1953 in Little Rock, Arkansas. Her father was an elevator contractor; her mother brought up four children. She won a full scholarship to university in Memphis — but worked nights in the campus infirmary while her friends were out enjoying their sorority parties. She married a bohemian artist, it lasted six months. She moved to New Orleans where she ended up selling ad space. This is when she first started acquiring art. By 1980, she had moved to New York, working for Condé Nast. Her big trick was to phone the presidents of the various cosmetic companies and ask them out for lunch. “I was always being asked out by older, very wealthy, powerful men.”

Following the advice of her older mentor, Manhattan art dealer, Leo Castelli she got bored of her life in NYC and set out to London. In 1986, she sublet her apartment and helped set up a London gallery, showing the likes of Bridget Riley. Later she left to work as director of Waddington’s contemporary department on shows by Howard Hodgkin and Julian Schnabel.  She moved to London, aged 33, and just three months after she arrived, she met Charles at a Royal Academy private view, and he proposed marriage three days later! 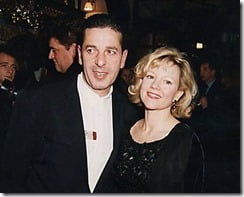 They fell in love talking about paintings. When she realized he’d only been separated from Doris for six days, she held out for nine months until she was satisfied the split was genuine! Smart girl.

At that moment she became his unofficial co-curator; living with Saatchi she lived the life of the wealthy and soon became a wife and mother. 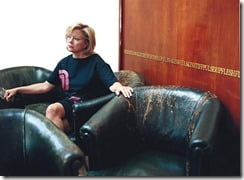 Since her divorce 12 years ago from Charles Saatchi-they have a 19-year-old daughter, Phoebe- and his remarriage to Nigella Lawson, she has reinvented herself as a curator and collector. When they called it quits in 2001 she was ranted a decree nisi at the High Court in London on the grounds of her husband’s “unreasonable behavior” that unreasonable behavior we call Nigella.

Kay stated divorce was a difficult time but don’t mind Kay the former Mrs. Saatchi has been living the life of the single and rich and had a fling with her trainer a young man in his 30’s back in 2003 although it didn’t last.  So in 2010 she made a dramatic change, getting a modern house in LA; her plan is to live there at least six months of the year.

“You know I’m American. I kind of want to be home … Really basically I wanted to go for the weather. That’s why I chose LA — and for the art scene because there’s something for me to do because I’m not a person who just hangs around.”

So now that her former husband seems to be getting a well deserved backlash for his recent actions Kay is saying she feel he is being treated unfairly after Charles himself admitted he publicly grabbed current third wife Nigella Lawson’s throat! During what he calls a “playful tiff”

So on one hand we have Nigella who was clearly hurt by her famous magnate husband and has abandoned him; and on the other we have Kay, 60 who never  experienced this kind of behavior from Mr. Saatchi. We have to remember Kay has remained close to the couple since her daughter Phoebe decided to live with her father so definitely former Mrs. Saatchi might have the inside story we are waiting to hear.