KEYT-TV anchor woman Anchor Paula Lopez was reported missing by her family after went out of her home around 10:00 a.m, but by 5:00 p.m she was safe and sound at her home, she was never missing, so the question is why did her family reported her as missing and what does her husband Judge frank Ochoa is saying about is wife missing person scare? 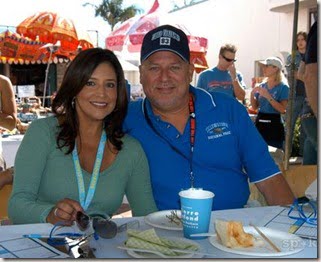 Perhaps after hearing so many stories of people missing, probably they  asked themselves why wait to report her missing until is too late when she can be save before tragedy struck? I don’t know why they got scare, what are the problems going on in their family household, according to media her family last spoke to her at 9:30 a.m, but didn’t hear from her after that..

“Her last known location was at her home located near Cathedral Oaks Road and North San Marcos Road,” the sheriff’s department said in an earlier statement this evening. “The last time her family talked to her was at 9:30 a.m. She has not been seen or heard from since. No foul play is suspected but her family is concerned about her welfare.”

However Lopez was back home around 5:30, nobody said why did her family reported her missing.

We are not commenting on the reasons surrounding why Ms. Lopez went missing due to the fact it is a private family matter,” the sheriff’s department said after Lopez was back with her family.

48-year-old Lopez who is married to judge Frank Ochoa father of her three children son Diego and twin girls Alana and Olivia.

In 1972 62-year-old Judge Frank J. Ochoa graduated with a bachelor of arts, English and history from the University of California in Santa Barbara and received his Juris doctor, law from the U.C. Davis School of Law in 1975.

In 1980 he was an executive director at the Legal Aid Foundation of Santa Barbara County, three years later Governor Brown appointed him to the Municipal Court and was elected to the Superior Court in 1996.

He created the the Substance Abuse Treatment Court and the Clean and Sober Calendar both very successful adult drug court programs in Santa Barbara, Judge Ochoa used to be a president of the Board of Directors of the Santa Barbara and Ventura Colleges of Law and former teacher at Santa Barbara  College of Law.