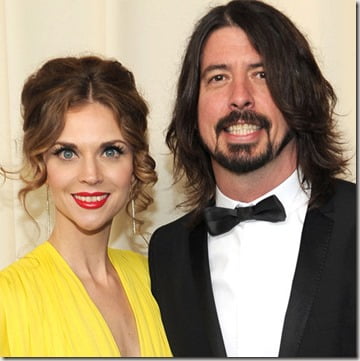 We have a baby alert!!! We are happy to share the news for rock star Dave Grohl and his lovely wife Jordyn are expecting child number three!

Long Island native Jordyn Blum met his hubby in 2001 in the Sunset Marquis hotel Bar in L.A. But he almost didn’t land the pretty blonde, he told Elle.com

“We went on a few dates and I decided that I wasn’t ready for a serious relationship, so I stopped calling. After three months I had a revelation and called back.”

He might have said that because her rocker hubby was previously married to photographer Jennifer Youngblood from 1994 to 1997. 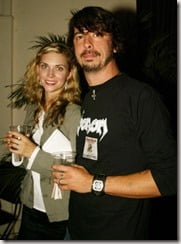 Blum was born on May 28, 1976 in Los Angeles, California. She officially became Ms. Foo Fighters on August 2, 2003; instantly claiming one of the hottest Rockstar Wives title. The gorgeous blue-eye gave birth to the couple’s first child on April 15, 2006. They became the parents of a baby girl in Los Angeles, Violet Maye now an eight-year-old. In October 26, 2008 Jordyn and hubby happily announced the were expecting child number two, second baby girl, Harper Willow was born April 17, 2009, now five. And now the couple has announced baby N. 3 is on the way! 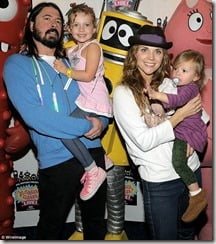 Are you betting for another girl? Well than you were right on! The Grohl-Blum sisters definitely have the music gene and have a good chance for getting into the business; with a father who’s resume includes former Nirvana drummer and Foo Fighters founder!

We did a little digging on 38-year-old Jordyn and although you might think how lucky Dave is to have the gorgeous gal by his side, destiny has also made all her dreams come true, check this out! Nine years before they first met, as a 17-year-old model she appeared on the cover of Teen Magazine’s June 1994 issue.  In it, she was asked what was her favorite music, she answered Alternative…Pearl Jam, Nirvana, etc.  Not even thinking her future husband was of course the drummer in Nirvana! And with mom’s great sense of fashion these girls are bound for greatness. 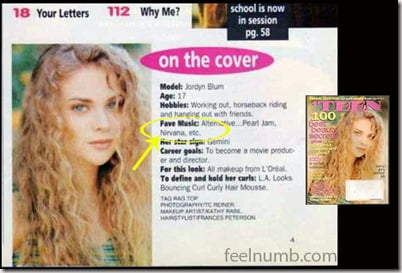 If you look closely you can also read her career goals include to become a movie producer and director and guess what, she has worked as a documentarian for her husband’s band. That’s as close as you can get huh! She has also been featured in her hubby’s band music videos, “White Limo.“