Meet lovely Sarah E. Williams, you can also call her Mrs. McHale, yup she is the pretty wife of actor, TV host and comedian, Joel McHale.

Sarah’s hubby is well known for his role on the NBC sitcom, Community. She and her funny man have been married for many years, the couple are parents of two children.

Want to know more about her? Of course you do! Sarah Williams Joel Mchale are most definitely couple goals and here we’ll cover all the details about the lovely missus, and the life she and McHale have together.

Even thought we don’t get to see his serious side often, Sarah Williams Joel Mchale, have been married for a long time, making them one of Hollywood’s longest marriages. Sarah walked down the isle to become his wife in 1996. They had met about a year prior. They moved to L.A. from Seattle. This means, Sarah Williams Joel Mchale have existed for over two decades. When asked about how he keeps his marriage fresh, the actor told in an interview for WebMD:

You have to choose your spouse every day. Tell yourself that this is the person that I love and want to be with. It has to be something that you do consciously, then it becomes subconscious. 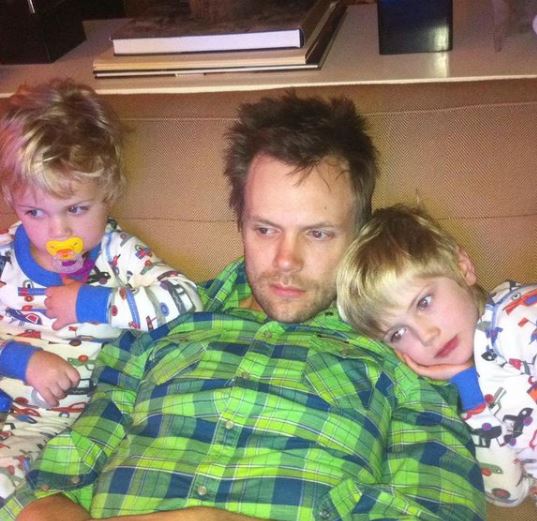 The couple’s first son Eddie, had open heart surgery as a newborn, luckily the couple got pass the scary moment.
Speaking about his son’s health issues, Joel said in an interview

“He was born with two large holes in his heart. It was horrific; we couldn’t believe it. But we just started dealing with it. There’s nothing else you can do but proceed,” “It was a dark tunnel, but we came out the other end. For other parents, it’s a tunnel that never ends.”

The comedian has also praised his wife for being an awesome mom saying:

“She just thinks of things I never do. If I were taking care of the kids, they’d be running around in potato sacks. People would ask, ‘Do your kids brush their teeth?’ I’d be like,’ ”Yeah, every year.’ So she’s brilliant, and she’s beautiful.”

Sarah Williams Joel Mchale have also had to face their share of misfortunes. While blessed to have two boys, Joel and Sarah have spoken openly about the agonizing time they went through when suffering a tragic miscarriage.

How did Joel McHale meet his wife?

Sarah Williams Joel Mchale first met in 1995. At the time they were both in their early 20’s. 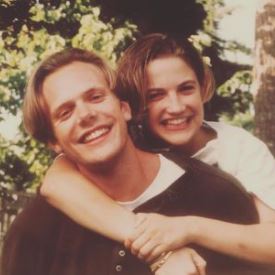 As a funny anecdote, Joel revealed once that prior to Williams, he had never been lucky in the love department and said about asking her out

I called her friend and asked if I could ask her out. She was like, “‘I’ll ask, but fat chance, buddy,’” McHale recalled. “But my wife took the chance. I’m sure she was like, ‘There’s no one else around, so I might as well.’”

Unexpectedly, the two hit it off and began dating soon after. They were married the following year. They became husband and wife on July 20, 1996. Williams wore her mother’s dress from 1967 for the occasion.

The answer is obviously yes, Sarah Williams Joel Mchale have been married for decades, 25 years to be exact.

In addition to their two sons, the family of four share their home with a few animals which includes three dogs and a rabbit. 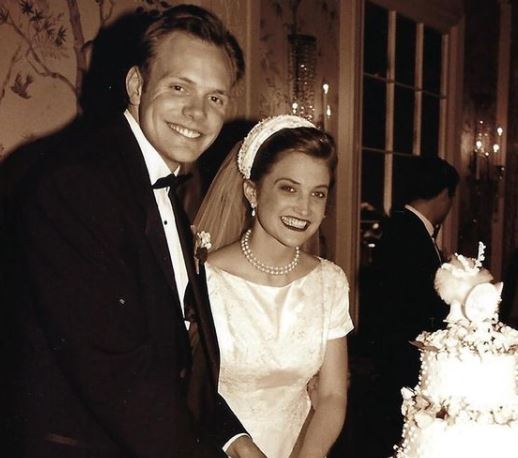 Joel Mchale wife, Sarah Williams who is active on social media, often shares images of her family and the couple’s fantastic relationship. For their anniversary last year, Sarah Williams shared a black-and-white photo from their wedding day on Instagram. She captioned it

“We were young and in love and probably naive, but I am so thankful we found each other and keep choosing each other. I love you!”

Who is Joel McHale married to?

Joel Mchale wife, Sarah Williams is a Washington native; she an older brother, Richard grew up in Seattle.
Joel Mchale wife, Sarah Williams was only 10, when her father was killed in a car accident. She often shares memories of him on social media. She and her mother Sally, who still lives in Washington, are very close. Her mother has lived with M.S. for years and was also diagnosed with Alzheimer’s. 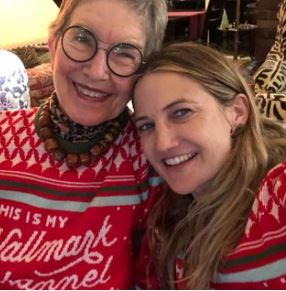 Sarah studied psychology at the University of Washington. However, Joel Mchale wife, Sarah Williams happens to be an artist; the kind that makes paintings. That’s right, the lovely mom of two and celebrity spouse is also a professional artist.

That said, she didn’t quiet pursue her passion at first because to her own accord, she had been “afraid to take studio art classes” as a college student.
Instead, after college, she decided to take an ordinary job. Her first job took her to Belfast in Northern Ireland. She served as a youth worker at a community center. She later returned to Seattle.
After being back home, she decided to take history classes at the University of Washington.
In addition, she worked for a “sportswear clothing line and then as a Creative Director for a greeting card/stationery company.”

Sarah Williams pursued art later in her professional life. According to her profile on the Carrington Arts Gallery website; once she and her husband made the move to Los Angeles in 2000, she decided it was time to do what she really wanted. 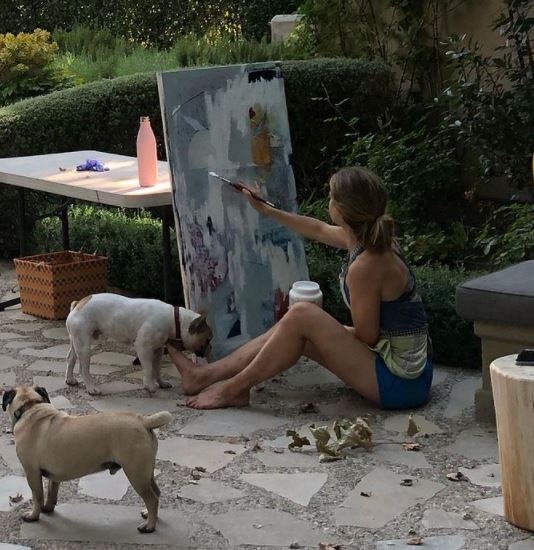 On the gallery’s website, Joel Mchale wife also shares the inspiration behind her work

I get a lot of inspiration for my art from nature and biology in its multitude of forms. A picture I took of a tree stump on its side beached on Vashon Island, Washington serves as a running motif and can be found in the three pieces in this exhibit.
In the piece titled “Save”, through multiple layers of paint and collage as well as color, I’m playing with the idea of memories: some are darker and more clouded, while others are more vibrant and present. The piece “Boundary Issues” delves a little deeper into what happens when things start to break down in the brain as is the case with Alzheimer’s Disease.

Joel Mchale wife, Sarah Williams who goes by Sarah McHale has an active Instagram account with over 7k followers. She writes on her bio 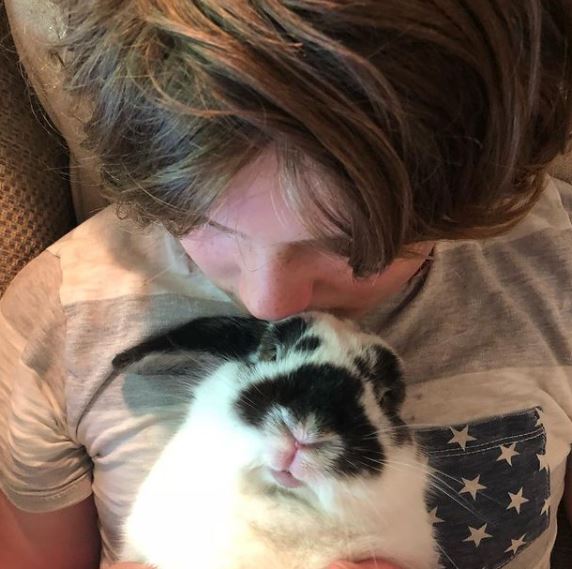 Sarah who has been by her hubby’s side since the mid ’90s is more inclined to keep a low profile. She often shies away from the limelight leaving her husband to shine. The two however have been seen together on numerous red carpet events.

What is Joel McHale’s net worth?

Sarah’s husband Joel, attended University of Washington, where he received a Master of Fine Arts from the Professional Actors Training Program.
His early career included time spent in local theater groups in Seattle, as well as small parts in CSI: Miami and Will & Grace.

McHale is perhaps best known for his snarky critiques of the reality TV world on E!’s Emmy-nominated The Soup, and also for his role as Jeff Winger –a fast-talking lawyer who gets caught with a phony college degree and forced back to school –on the NBC/Yahoo! comedy series, Community. 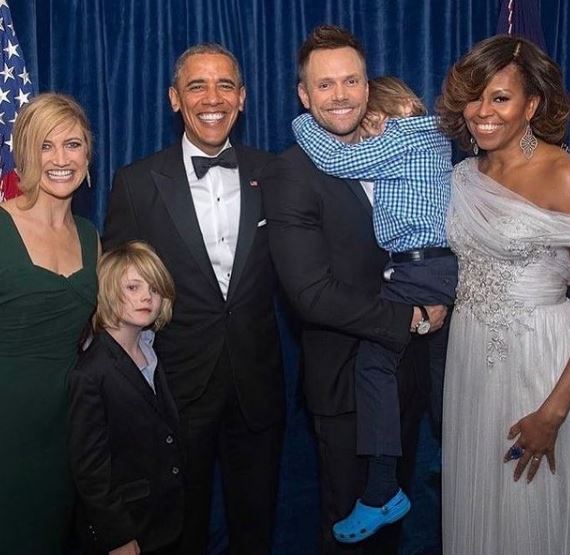 In addition to multiple movie appearances, Joel hosted the Netflix special, The Tiger King in 2020. He also hosted Fox’s New Year’s Eve Toast & Roast. Joel is currently the co-host of the podcast The Darkest Timeline, along with comedian, Ken Jeong.

All in all, the entertainer is a pretty well-known face on the Tinseltown circuit.

According to online sources, his net worth is estimated at $14 million. At one point he earned $60k per episode on Community.

How old is Joel McHale?

Joel McHale was born November 20, 1971 in Rome, Italy. That means Joel will turn the big 50 later this year.
He lived in Italy with his family while his father worked at Loyola University Rome Center. The family later settled in suburban Seattle, Washington.