Arnie Anderson is the longtime husband of TV and film actress, Conchata Ferrell -best known for her work on the hit sitcom Two and a Half Men.

Arnie’s wife has enjoyed a decades-long career, while she is best known playing Berta the housekeeper for all twelve seasons of Two and a Half Men -she has had critically acclaimed performances on stage, movies and TV shows.

Born Conchata Galen Ferrell on March 28, 1943; the West Virginia native attended West Virginia University but dropped out. She later graduated with a degree in history education from Marshall University.
She started her career in an off-Broadway show called The Sea Horse. She has received numerous awards for her work on stage. This includes a Drama Desk Award, and Theater World Award, and an OBIE Award. 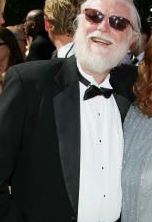 In addition to her career, she is a married lady. Ferrell and husband, Arnie Anderson tied the knot in 1986. The two married just as Ferrell’s on-screen career was really picking up.
At the time, Arnie Anderson was already the father of two daughters; one born in 1976 and the other in 1979 -from previous relationships. He and Ferrell, welcomed another child together the first for Conchata and the third for Anderson. Their daughter, Samantha, was born in 1982.
It is not quite clear what Anderson does for a living, however he’s been photographed attending red carpet events next to his wife. Conchata recently told TMZ, Arnie Anderson who ‘hasn’t taken care of anything a day in his life’ was there for her when she contracted a serious infection recently.