Roberta Gjonaj is the beautiful wife of New York City Council Member, Mark Gjonaj -who represents District 13 in the Bronx.

Roberta’s husband is in addition, Chair of the Small Business Committee. Her 52-year-old hubby has a record of taking campaign contributions from alleged mob affiliates.

The Bronx native is the son of an Albanian immigrant. Mark who is a graduate of St. John’s University, was elected to the NYC Council in 2017, he previously served as NY State Assembly Member for the 80th District from 2012 to 2017. Prior to that, Gjonaj was the Bronx Commissioner of the New York City Taxi and Limousine Commission.

The 52-year-old calls himself a ‘Lucky husband and proud father’ on social media. So who is the ‘lucky’ woman he is married to?

Roberta Gjonaj was born July 5 in Chicago, Illinois. She is her husband’s number one fan and supporter. Though she keeps a low profie she keeps busy doing her own thing. Roberta is a public school nurse.
According to her LinkedIn, Roberta who is in her 40’s, studied at College of Mount Saint Vincent, Riverdale NY.; where she obtained her Bachelor of Science in Health Education graduating in 1999.
She is currently listed as a Registered Nurse at NYC-Office of School Health at NYC Department of Education. She was previously a public health nurse from 2010 until 2017, at NYC Department of Health. 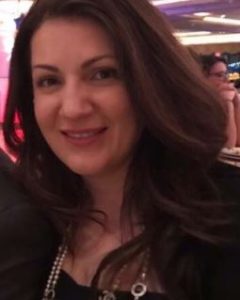 The dark haired spouse is also the proud mother of the couple’s two children, sons Nicholas and Joseph.

The couple celebrated their 25th wedding anniversary in June on 2019. Mark wrote on Instagram ‘As Roberta and I celebrate and cherish a milestone — our 25th Wedding Anniversary, we take a moment to reminisce the love, the family and the happy memories we have created together throughout the years. May we continue to grow ever stronger and may life grant us many more amazing years. Happy Anniversary to us!’

In 2017, Roberta was part of the Women Empowerment Summit, hosted by Bronx Community Board 7 -a women empowerment summit where a few women shared their secrets to success.
Roberta Gjonaj lives in the Pelham Parkway section of the Bronx with her husband and their sons.