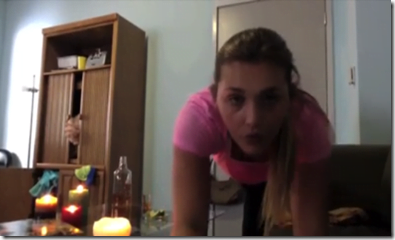 Thinking on DIY **** projects for your boyfriend? What about a video of yourself twerking? Well this is exactly what a girl thought would make a special gift for her boyfriend and when you think about it, it is a pretty good idea but for girl Caitlin Heller it went totally unexpected! What was supposed to be a **** gift/dance for a boyfriend could have ended up in something very tragic!

Ouch! Is the first thing you think when you hear her scream! Have you seen her insane twerking video?? Really, never though twerking could be this dangerous!

Caitlin Heller recently posted the video of herself doing the famous dance and just moments later after booty shaking moves she actually catches fire! She called it “Worst Twerk Fail EVER” because it literally is!

Caitlin in an effort to impress her boyfriend attempts to record herself while doing the “Miley Cyrus” infamous moves but the **** scene turned into a disaster when she was interrupted by a friend, fell through a glass table and caught fire! 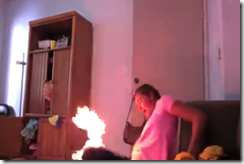 The girl is actually doing fine and we give props to her for being able to laugh it out but when you look at her screaming is easy to picture the seconds of panic and pain she went through! While dancing alone in her candle-lit sitting room, Heller does a handstand against the door while ‘twerking’. A friend opens the door during the dance, knocking Heller through a plate glass table and setting herself on fire.

The video has over 200,000 views since being uploaded on 3 September 2013. This girl could easily win America’s most watched videos! The video lasts only half a minute but we hope her dignity isn’t too bruised? For all the twerkers out there better learn from Caitlin’s mistake and be safe when dancing!

There is a Facebook profile with her name you can check out here.