Her husband will be doing what he does best during tonight’s episode of The Bachelor. According to Us Weekly, Terry Fator and one of the women will be taking the stage to entertain, bachelor Ben Higgins.

Some of you might remember Terry Fator as the winner of the second season of America’s Got Talent. The then 41-year-old contestant took home the million dollar prize. The following year, Fator became a Las Vegas Strip headliner.

According to his website, the Texas native spent over 20 years on the road performing at everything from schools to county fairs before becoming a Vegas main act.

Terry Fator has been married three times. He was married to first wife, Melinda. The couple finalized divorce proceedings in 2010 after being separated for over a year. According to Wikipedia, Melinda left Terry not long after they moved to Vegas in 2009. They had been married since 1991 after meeting while Terry was a band singer in Texas.

Taylor Dew actually worked as Terry’s on-stage assistant in Las Vegas. However, the marriage didn’t last long and they divorced in early 2015. 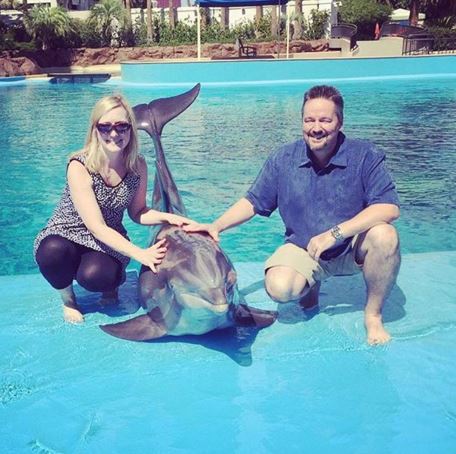 Fator found love once again in the arms of current and third wife, Angie Fiore. The couple tied the knot on September 4, 2015.

Angie Fiore is a catering chef and event planner. The couple were introduced by Terry’s sister, Debi. According to the Las Vegas Sun, Terry had come to Dallas to do a charity benefit. His sister organized a small party after the event. The party was catered by Angie Fiore. They clicked and the rest, as they say, is history.

Angie Fiore travelled between Dallas and Las Vegas to visit Terry over the weekend and coming back to run her business over the week.

She even catered Terry’s big 50th birthday celebrations. Gushing about his then girlfriend, he said, “This was so meant to be. Angie is the love of my life.”

Angie Fiore and Terry tied the knot last September on an impulse after they found themselves talking about her parents’ anniversary.

Let’s hope the third one is the last one for Terry and his lovely wife, Angie Fiore.