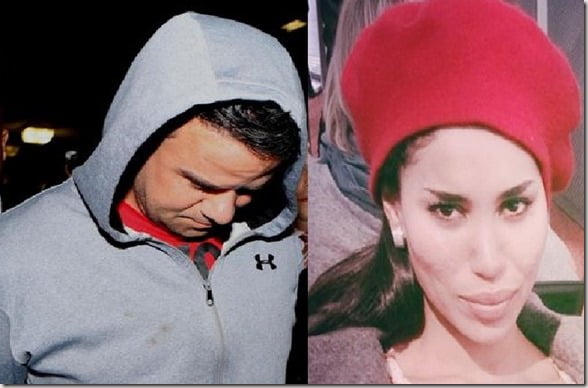 Meet Dominick Diorio, he is a 40-year-old man from Long Island and he sure is in a lot of trouble. Diorio has been identified as Donald Sterling’s mistress V. Stiviano’s attacker! Diorio who lives with his parents and was in the area celebrating his birthday, has been charged with assault and hate crime.

Stiviano, the woman who recorded Los Angeles Clippers owner Donald Sterling making racist remarks that got him banned from the NBA, says she was punched in the face and suffered visible injuries.

Her lawyer claims two men were involved in the attack and called Stiviano a ‘n***** *****’ and spat at her as she got into a taxi. According to reports the second man involved in her alleged assault has not been arrested.

Have you seen the pictures she claims are the proof she was seriously assaulted and allegedly caused by Diorio? V. Stiviano reveals the injury she claims she suffered in attack after being racially abused outside exclusive Manhattan hotel. The attack left Stivano’s face swollen and red-ish. The photos clearly show her swollen face and red eye and bruising. You can take a look here.

V.Stiviano was assaulted outside the Gansevoort Hotel in New York City in a racially motivated attack on Sunday.

Dominick was arrested  yesterday in connection with the assault of V. Stiviano. Police said Dominick Diorio, 40, was arrested at his home in Old Bethpage, New York, and charged with assault as a hate crime, aggravated harassment and other charges for punching Stiviano in the face outside the Gansevoort Hotel in New York on Sunday.

Reports say the 31-year-old “Artist,Lover,Writer,Chef,Poet, Stylist, Philanthropist” was leaving a restaurant with friends when Dominick and another fella recognized her from her role in the Sterling downfall and

The statement released by her legal team said. The crazy moment didn’t stop there

‘Moments later, Ms. Stiviano was punched again by the same person while he was yelling ‘I am going to slaughter you’.

Diorio was also injured as a passerby jumped in to help Stiviano; she didn’t filed a report right away so the attacker was identified in surveillance footage by police and then put in a lineup and picked out by Stiviano on Tuesday.