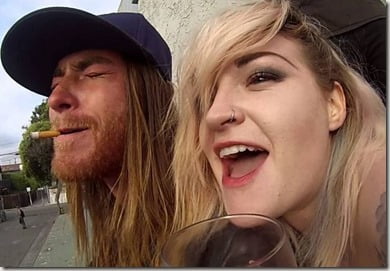 Described as Jenifer Aniston’s punk brother, Alex John “AJ” Aniston might be in his early 20’s but he is already a married man and might also be a daddy pretty soon! That is right! AJ became a married fella earlier this year to his young makeup artist and tattoo model Adriane Hallek.

It was Hallek who actually posted to her Facebook the happy news of her wedding to AJ. According ot the National ENQUIRER the young love birds got hitched on Jan. 29. They also caught Hallek, 24, walking out of a Los Angeles medical clinic with an ultrasound in hand!

Last year Adriane’s hubby, talked about his struggled to keep anonymous from his Hollywood sibling. The son of “Days of Our Lives”  John Aniston and his second wife Sherry Rooney told the Daily Mail

Want to know more about Adriane? We sure do! We got lucky to find some cool facts about her! 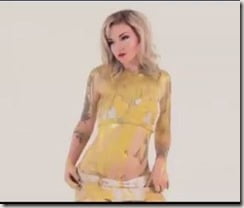 The inked girl is a trained  MUA, she is 5′ 2″ pretty slim (115 lbs) and a natural blonde but she changes her style very often. When describing herself she says

I’m strange but I love people

When describing her favorite tattoo –and she has many –she talked about the one on her upper left arm, saying it signifies her childhood. She goes on to say she moved around a lot as a kid and the only place it felt right was Disneyland so she got her favorite ride tattooed, hey that seems to be a pretty good reason right! 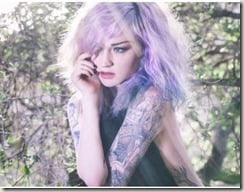 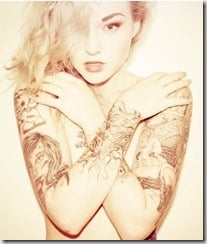 Her self-described artist hubby, –who sports t-shirts and a Mohawk and has “Live Free” tattooed across his stomach –and Adriane live quite a different lifestyle from his America’s Sweetheart sister. AJ was said to live a nomadic lifestyle, a close friend revealed to Australian magazine New Idea

“He had a mattress in the back of his van, always had the same pair of pants with 20 patches on it and only had three shirts.”