Ann LePage is the wife of Maine Republican Gov. Paul LePage. Her husband of 32-years went nuts and left a vicious voice message for Democratic Rep. Drew Gattine, in which he called him a c-ksucker and then later threatening him to an armed duel!

According to reports, 67-year-old Paul LePage –who had been accused of being a racist by Gattine –called him to confront him. In a recording of the message obtained by the Portland Press-Herald, Ann’s husband can be heard saying:

“I would like to talk to you about your comments about my being a racist, you c–ksucker. I want to talk to you. I want you to prove that I’m a racist. I’ve spent my life helping black people and you little son-of-a-*****, socialist c–kscuker. You … I need you to, just friggin. I want you to record this and make it public because I am after you. Thank you.”

As if the message wasn’t enough, Paul LePage was so angry that he according to the NY Daily News, he called reporters to the governor’s Blaine House so that he could broadcast an armed threat:

I would point it right between his eyes, because he is a snot-nosed little runt and he has not done a **** thing since he’s been in this Legislature to help move the state forward,” 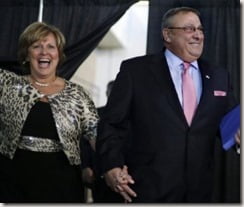 Ann Became the second Mrs. LePage in 1984. Ann who was born Ann DeRosby is the mother of the couple’s two children: Paul and Lauren. Daughter Lauren LePage Studies at University of Maine School of Law. Son, Paul LePage lives in Portland, Maine.

Her husband is the father of daughters Lisa and Lindsay, from his first marriage to Sharon Crabbe.

Ann –a Main native, grew up with a strong work ethic. In her role of Maine’s First Lady, Ann LePage is known for her passionate advocate for military service members, their families and our beloved veterans. Raising awareness for these individuals has been her top priority.

According to the Maine official page, Mrs. LePage was selected as the 2012 Joshua Chamberlain’s Chapter Person of the Year by the First Region Association of the United States Army. Her continued dedication, compassion, untiring efforts and support for veterans, service members and their families has clearly defined her character and reputation since becoming First Lady of Maine. 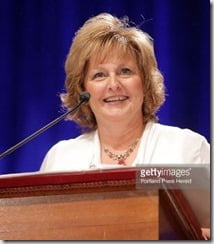 Ann LePage like her husband, have stunned in the past making headlines. Last June the wife and mother was hired as a waitress to make some extra cash during the summer. The 58-year-old was said to have gotten the job thanks to her daughter, Lauren LePage.

It was also revealed Ann’s husband’s salary, is the lowest of any US governor.

Ann LePage also works closely with Retired Army Staff Sergeant, Travis Mills and the Travis Mills Foundation.  Through ongoing fundraising efforts, the foundation is establishing a retreat to help combat wounded veterans and their families unite with the land, water, nature and each other to revitalize themselves and to encourage each other to keep moving forward.

What will Ann LePage think of her husband’s behavior?