The reality TV stars have been fooling us the whole time! It appears the “Bachelor in Paradise” former members are still going strong after their alleged TV break-up.

You might recall just days ago we saw Vinny leaving the island after a blowout fight with Izzy. And just when you thought you will never see them together again, things seem cool with the couple who was caught on right before boarding a flight together.

Izzi had allegedly dumped Vinny for Brett Melnick and that’s why he eventually made the decision to leave the spin-off series.

The other members of the show and pretty much the outside world, could not believe what happened between the couple who were felt to be the ‘strongest’ coupling there.

In one of the most dramatic break-ups, Vinny poured her heart out after he confronted Izzy telling her that she was the reason he was there and he had wanted to ‘build a relationship’ with her and leave with her.

‘I am hurt, heartbroken, crushed, I am blindsided by this,’ said Vinny as Izzy cried and told him she did not want to hurt him. 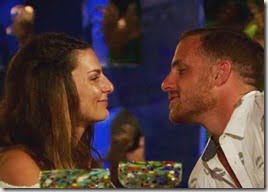 According to TMZ who caught up with them on Wednesday at L.A.X, the couple tried to downgrade their relationship and used the ‘just friends’ card. Izzy then lovingly touched his face right in front of the camera or removed something from his beard…either way, that move is only done by someone who is not ‘only your friend.’

The gossip site also reveals a photo of Izzy and Vinny getting cozy during the L.A. to NYC flight, and they didn’t seem too concerned with any spoiler alerts. Passengers say they couldn’t keep their hands off each other. She eventually fell asleep in his lap.

Just to have in mind, Isabel “Izzy” Goodkind –a graphic designer –was unfortunately sent home on the first night by Ben Higgins in Season 20.

While, Vinny barber extraordinaire, arrived in Paradise fresh off of JoJo Fletcher’s season of The Bachelorette.

Are you happy to see teamvizzy together again? Thoughts?