Right about now, The Bidens are thanking the heavens for Symone Sanders and are certain whoever hired her, did a fantastic job.
The 30-year-old was having none of it, when a demonstrator had the bad idea to storm the stage at Biden’s speech in Los Angeles on Tuesday night. Sanders can be seen tackling the protester as if she was a professional football player and ultimately stopped the protester in an attempt to bring her anti-dairy message to a nationally televised audience.

So who is Symone Sanders, aka day saver? Symone Sanders was born December 10, 1989; in Omaha Nebraska -to parents Terri and Daniel Sanders.
She graduated with a Bachelor of Business Administration in 2013 from Creighton University. She is currently the Senior communications advisor for Joe Biden’s presidential campaign. In the past she served as chair of the Coalition of Juvenile Justice Emerging Leaders Committee and is a former member of the Federal Advisory Committee on Juvenile Justice. 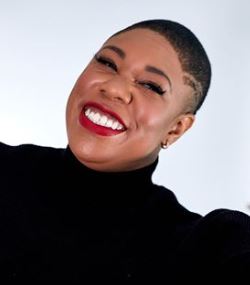 Since then, she’s also served as a Democratic strategist and political commentator on CNN. According to a profile, she is the principal of the 360 Group LLC -where she provides strategic communications guidance to organizations, businesses, individuals, campaigns and candidates.
In 2018 and 2019 as a resident fellow at Harvard’s Institute of Politics at the Kennedy School and the University of Southern California’s Center for the Political Future respectively. She has been featured on multiple news networks and profiled in national newspapers and magazines.

She has over 110k followers on her Instagram account -where she calls herself a ‘Rabid Feminist. Author. Strategist. Nebraskan’
On Instagram she also shares a link to her book ‘No, You Shut Up | Speaking Truth to Power and Reclaiming America’