Ann Lamont is the lovely wife of businessman and politician, Ned Lamont -who currently serves as the governor of Connecticut.

Ann’s husband is said to be taking part in a multi state effort on how to reopen their economies in order to combat the coronavirus pandemic.

Prior to being sworn in as the 89th governor of Connecticut in 2019, Ned was known as a telecommunications entrepreneur.
Born Edward Miner Lamont Jr.; on January 3, 1954; the Washington native earned a bachelor’s in sociology from Harvard College and an MBA from the Yale School of Management.
He launched a telecommunications business in the early 1980s, growing the company to serve over 400 of America’s largest college campuses. He ran for U.S. Senate in 2006 and also for governor in 2010, losing both times. 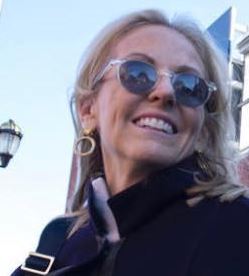 Ned has been happily married to Ann Lamont for decades, since 1983. Together they are the parents of three adult children, Emily, Lindsay, and Teddy. The spouse and mother has been a great source of support in her husband’s political ambitions.

Ann Lamont was born Annie Huntress, she grew up in Whitefish Bay, Wisconsin. The blonde is well known as a venture capitalist and is in fact, one of the country’s most successful women in the high-stakes world of venture capital for more than three decades.

She received her bachelor’s degree in political science from Stanford University. After graduating in 1979, Lamont spent six months working at a law firm. She then focused on her true passion, venture capitalism; joining Oak Investment Partners in 1982.
The now managing partner at Oak Investment Partners, has a blend of expertise in healthcare and financial services technology.
Annie has appeared on the Forbes Midas List, Institutional Investor’s FinTech Finance 40 list, and the Top 100 Venture Capitalist rankings published by CB Insights and The New York Times.