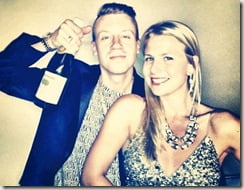 Tricia Davis, Mackemmore’s fiancée shows her ring to the public!

Macklemore asked her to marry her seven years ago, but Tricia Davis, since back on that date had stuck by her beau through thick and thin. Mackelmore proposed to Trisha on Martin Luther King Day while hiking in the Los Padres Mountains. She totally fell in love with him despite his addictions, during those rough times, they could barely afford anything. Her mom was constantly asking her what the heck was she doing. But she knew from the first time she saw him perform, that he had that potential needed for fame.

There have been people that have supported them through this journey. That bought the album when it could be easily pirated. That could stand in the cold with smiles to show their support.

Macklemore met his girlfriend Tricia Davis on Myspace!  Now you see this media is not just for weirdos!

Tricia Davis works as Macklemore’s tour manager too. The two are so committed to making their relationship work, Tricia has managed every aspect of her love’s tour..three times!