Shante Broadus is the long time wife of famous rapper, Snoop Dogg. Shante and her West Coast rapper hubby have been married for nearly 20-years and her 44-year-old man shared an epic photo to his Instagram account, to commemorate the couple’s 19th anniversary.

Shante Broadus is the former Shante Taylor, she and Snoop whose real name is Cordozar Calvin Broadus, Jr. have known each other since their high school days. The high school sweethearts tied the knot on June 12, 1997 and have gone to become the proud parents to three kids.

Everyone familiar with Snoop Dogg knows he was arrested several times for drug possession and spent time in prison. He started making music as a way out of his troubles. 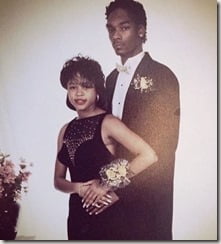 Snoop –who got his nickname from his mother because she thought he looked like the character in the Peanuts cartoon –climbed its way to the No. 1 spot on Billboard’s hip-hop and Top 200 charts, with his first album. His next album, Tha Doggfather (1996), also reached the top of the charts.

Snoop became known for his laid-back rapping style and his name has become synonymous with gangster rap of the 1990s.

The Drop It Like It’s Hot has also branched out into acting and appeared in several films, including 2004’s Starsky & Hutch. He has made several guest appearances on television shows, including “The L Word” and “Weeds.” 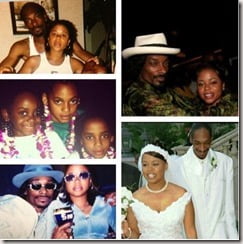 As for Shante, not everything has been perfect. She and Snoop were briefly separated in 2004 but renewed their vows four years later in 2008.

We saw her as a real boos lady when she and her family, starred in their own reality TV series. She along with the whole family debuted on E!’s 2007 “Snoop Dogg’s Father Hood.”

With her husband’s fame, Shante has automatically also won a number of followers. She describes herself on social media as a “Mother, Wife, Philanthropist & Entrepreneur.” Shante Taylor was born October 30, 1971. The California native has also had her own running’s with the law. Back in 2008 Shante Broadus was arrested for a DUI. Now a days, the 45-year-old keeps busy doing her philanthropic thing.