Ro Hernandez is the girlfriend of TV personality, Kate Chastain. It appears there is major trouble for the couple after its been reported, the blonde reality TV actress, Kate Chastain was arrested on domestic violence charges!

Chastain, known for her tenure as Chief Stewardess on the Bravo! reality TV series Below Deck, was taken Monday in her home town of Melbourne Beach, Florida.

Things got wild between the ladies according to TMZ, Ro Hernandez was bit her in the forearm, bicep and leg by Kate. Cops say Kate also put a knee on her head, choked her, and tried to stop her breathing.

Everyone familiar with the show would know, she appeared alongside Benjamin Robinson in season 2 of Below Deck, when he was then serving as the yacht’s chef. However they didn’t last.

The Daily dish confirmed earlier this year, Kate Chastain was in a relationship with a woman. The blonde revealed:

I am currently dating a girl. She’s amazing. I never, ever imagined myself dating a girl. I never was attracted to girls. So I’m a little caught off guard, but she’s just a really special person”

The gals met at a bar where they started chatting. What started as a friendship, eventually turned romantic, Chastain said.

Kate’s former fling, Ben, was reportedly all about the Kate-Ro romance. “I think it’s great. I obviously want Kate to be happy. It’s obviously a little bit strange late on to change your sexuality, I guess, at the age of 32,” he told The Daily Dish. “I’m very happy for them. I like her girlfriend. 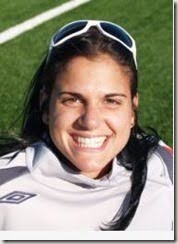 Ro Hernandez or Rocio Hernandez happens to be a superstar on her own. She’s a pro-athlete, soccer player. Born in Madrid, Spain of a Puerto Rican mother; Rocio Hernandez is the former SF Nighthawks Team Captain. She is Florida Tech graduated who majored in Communication/ PR in 2008.

Accoridng to Starcasm Ro had a number of gig following her college graduation. She coached, she played professional soccer, she became a personal trainer, and she did marketing as well as graphic and web design. At one point she was also approached by the Puerto Rican national women’s soccer team.