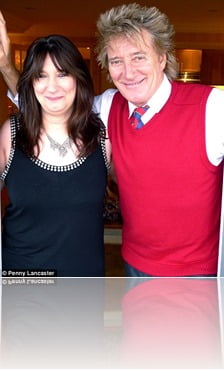 Little is known about Rob Stewart’s eldest daughter, a few years ago we heard about Sarah Streeter who was born to  the singer and his ex-girlfriend Susannah Boffey, Sarah was given up for adoption and had great parents, she also reconnected with her famous biological father who said he is closer than ever with Streeter.

68-year-old Rob Stewart has 8 children from his relationship with ex-girlfriends and ex-wives, the first daughter he welcomed into his life was Sarah Street who was born in 1963 when he was 18, Sarah  now 50, was the product of Stewart’s one year relationship with an art student named Susannah Boffey who was 17 at the time.

Even thought Susannah now known as Susannah Hourde knows her daughter Sarah Street reconciled with Rob after her adoptive mother passed away in 1997, she said she didn’t care about reconciled with her, she is sure it would be an impossible thing to do.

“I don’t care about Sarah any more. I used to but I don’t now.

‘She says these kind of things every now and again. It’s just what she does. I think it’s almost impossible that we will be reconciled now.

‘It’s all been so tough. There were attempted reconciliations and they didn’t go very well. It has all been very hard.”

Susannah  got married to Daniel Hourde an sculptor with whom  she had one son  26-year-old Charles, after her divorced with Hourde she moved to Normandy, Northern France, where she lives wit her boyfriend.

Sarah Streeter’s parents met at a London nightclub in 1961, she was born two years later  right after she and Stewart broke up, they split up after he asked her to give Sarah away and she refused, at first Susannah tried to raise Sarah on her own, but eventually opted to give her up for adoption.

Sarah Streeter spend 4 years moving from one foster home to another until Gerald and Evelyn Thubron adopted her when she was five, the Thubrons were already the parents of their son Colin Thubron who is now a well known writer, Streeter grew up in Uckfield, East Sussex. Before Evelyn passed away, she told Sarah then 18 who her real father was the Rob Stewart whose poster adorned her bedroom’s wall

This was the early Eighties and Rod was already very famous. He was always in the charts. I remember saying for days ­afterwards: ‘There must be ­hundreds of Rod Stewarts, are you sure it’s the Rod Stewart?’

‘That was quite a thing to come to terms with,’ she says ­quietly now. I had a poster of him on my wall because I thought he was ****, and then ­suddenly I find out he’s my father.’

Their first meetings were not easy, but as the years went on their relationship became stronger.

“Now [that] I’m getting to know him more I think I understand what went on,” said Streeter, who has met several of her half-siblings. “Rod has actually come into my life in a big way since mother’s gone, and I don’t think that’s a coincidence. Now we’re at the start of a new chapter, and that’s wonderful.” I