Patrisha McLean is the long time wife of singer-songwriter Don McLean, who wrote and sang the 1971 classic “American Pie.”

Her husband has been under the spotlight the last couple of days after he was arrested and accused of domestic violence on Jan. 18th. According to reports, the an incident took place around 2:00 AM at his Maine Mansion.

56-year-old Patrisha McLean is a renowned children’s photographer in Camden, Maine, where the couple resides.

According to her site, Patrisha specializes in black and white portraits of children. She utilizes a film camera in natural light. Her prints are hand-crafted in the darkroom.

Patrisha McLean was born Patrisha Shnier. She grew up in Montreal and lived in San Francisco.

She began her career as a newspaper reporter. The couple has been married since 1987.

Her husband is one of America’s most enduring singer-songwriters and is forever associated with his classic hits “American Pie” and “Vincent (Starry Starry Night)”. Since first hitting the charts in 1971, Don has amassed over 40 gold and platinum records world-wide and, in 2004, was inducted into the Songwriters’ Hall of Fame. His songs have been recorded by artists from every musical genre, including Madonna and George Michael.

Patrisha has been equally successful on her own. Her photographs of children have been exhibited in museums and galleries across the country, including the Caldbeck Gallery in Rockland, ME and the Silver Eye Gallery in Pittsburgh, PA and are in the permanent collections of the Farnsworth Museum and Portland Museum of Art. Her page says. 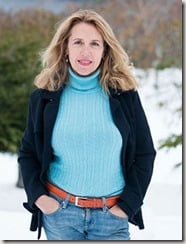 Her second and latest photography book “My Island”, was released in June 2015. The book is about the children living on the Maine islands North Haven, Islesboro and Vinalhaven.

When Patrisha is not busy taking pictures or writing, she can be found gardening –which she says is her passion –on the grounds of their massive property in Camden. Patrisha writes a column on gardening for the Camden Daily Herald.

Patrisha McLean and Don are the parents of  Jackie and Wyatt McLean. Their daughter, Jackie McLean –who is an author and poet –tied the knot in 2013, to English teacher, Shawn Strack. Ms. McLean graduated in May 2012 from Bard College in Annandale, N.Y. The NY times reported.

70-year-old Don McLean was released on bail on Monday. It is not yet clear what exactly happened between Patrisha and her husband of almost 30-years. The Daily Mail reports, she took out a restraining order after claiming he physically assaulted her and threatened her life.

He will appear in court next month.