Jason Melo is the Harlem, NY man who had the nerve to make his girlfriend walk naked in broad day light for everyone to see!

Many would be glad to know, the 24-year-old has now been arrested after forcing his 22-year-old girl to walk the streets **** naked while berating her. According to reports Jason Melo was arrested at around 5 p.m. Wednesday and was awaiting arraignment.

He was taken under criminal obstruction of breathing, coercion, assault, and acting in a manner injurious to a child less than 17 years old charges.

The story goes like this. Jason Melo allegedly found out his girlfriend was sexting with at least seven other men. He became enraged and apparently before he started filming, he allegedly choked her in front of her 3-year-old child. It is not clear if he is the father of the child.

Jason Melo then had the ‘clever’ idea of making his girlfriend go outside in nothing but a towel and boots.

Then he began recording her. The footage only shows his girlfriend walking from the back. A couple of minutes into the footage he removes the towel from her body leaving the young lady totally exposed.

She walks around as calmly as she can and takes shelter next to a trash can and later finds a plastic cover that’s being used for a parked bike next to the sidewalk.

Jason Melo’s actions not only got him in trouble with the law but had made him the subject of media backlash. Even NY First Lady Chirlane McCray had this to say:

“Earlier this week a video emerged that depicted intimate partner violence on a sidewalk in our city. The video displayed verbal abuse, forced humiliation, and harassment by the alleged offender, directed at his wife,” McCray said. “Posting that video online perpetuated the abuse, which New York City does not tolerate. We are steadfast in our efforts to make sure all victims of abuse are aware of the many resources available as we strive to make New York City’s public and private spaces safe for all women and girls.” 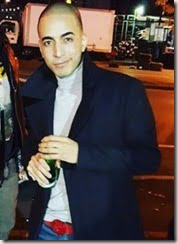 According to the NY Daily News, a remorseful Jason Melo posted several Instagram videos, saying how sorry he is and how wrong it was to do what he did.

Filming himself he says:

“Jason Melo here. I want to ask all women for forgiveness. I want them to know, that really, I didn’t want this to – I didn’t think this would – get to this point,”

“Maybe, I made a mistake, to do what I did, from the beginning to take her out naked. I really regret this. If I could turn back time, I wouldn’t do it. Because in my mind, so much has happened to me.

“I came from a woman, I have a daughter, and I have two sisters. But look what you pushed me to do. I am sorry for everything. This the last video I will make, I don’t want any interviews, I don’t want anything,”

Jason Melo is a Dominican native who describes himself as an entrepreneur and as of now has over 36K followers on Instagram.