Ethan DeLorenzo is the boyfriend of actress Jena Malone. His 31-year-old girlfriend just announced they will be welcoming their first child together pretty soon!

Jena got deep and personal, captioning the photo

Womb to womb
To beating wing
I climbed out of the eternal
And into the shape of me
Some words I wrote years ago when I was thinking about my own mother. And the woman she was when she had me. And the woman I was reaching to become. The shape your desires make out of you. The body you become to hold your dreams. It’s with two feet firmly on the ground and a heart swelling in an ocean of love that I’d like to share the new shape I am becoming to hold the greatest dream of them all. #babybump#newparents

Jena, who plays steely Johanna Mason in The Hunger Games movies, is also known for her roles in other films including “Sucker Punch” and one of her first projects, “Step Mom.”

Jena has been keeping busy, she starred in Richard Gere film, Time Out of Mind. She is also set to star in the highly-anticipated Batman v Superman: The Dawn of Justice, with Ben Affleck.
In addition to her acting career, Jena is an experimental musician with her group The Shoe. Something she and baby daddy, Ethan DeLorenzo have in common. De Lorenzo is described as a photographer and musician himself.

But how much do you really know about  her guy? Who is Ethan DeLorenzo? 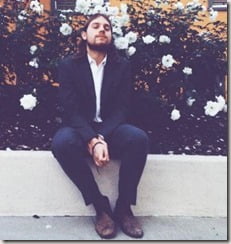 According to his website, Ethan DeLorenzo is involved in projects including music, photography, film and video. According to his LinkedIn profile, he is a music producer based in Los Angeles working with Decadent Wreckords.

As a freelance photographer, he was interested mainly in Art and Nature Photography. Dabbling in Fashion such as Diane Von Furstenburg, The Well, etc.

He previously worked at The Cutting Room Studios as a recording engineer.

Ethan DeLorenzo keeps very active on social media, he has over 12K followers on Instagram and calls himself ‘uglyhippie.’

Major congrats to the new parents!