Nicole Tuck is the lady love of DJ Khaled, her man is one of the hottest DJ’s in town with over three million followers on social media.

Nicole Tuck must be super proud of her man who has released his brand new album Major Key featuring a number of collaborations. Major Key is his ninth studio album.

The 40-year-old New Orleans native has an extensive career in the music business. He was a radio host for the Miami-based urban music radio station WEDR and the DJ for the hip hop group Terror Squad. From 2004 to 2006, Khaled assisted in the production of the hip-hop albums Real Talkby Fabolous, True Story by Terror Squad, All or Nothing by Fat Joe, and Me, Myself, & I by Fat Joe.

In 2006 he released his debut album. Khaled has been the president of record label Def Jam South since 2009 and he is also the CEO and founder of We the Best Music Group.

Most recently, DJ Khaled has found success as a snapchat guru. He now known for sharing his “major keys to success” on Snapchat. 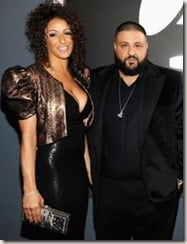 Lovely Nicole Tuck who is currently pregnant with the couple’s very first child, made a red carpet appearance recently. She and her baby bump looked marvelous at the BET Awards last month. She and Khaled have been in a long time relationship.

According to online sources, Nicole Tuck met Khaled years ago, before he became a famous name.

The couple is currently engaged, so that makes Nicole Tuck not only his girlfriend but his fiancee and soon-to-be baby mama.

The curly haired used to be the owner of her own Miami based, clothing business called ABU Apparel. Accoridng to her LinkedIn, she holds a Fine Arts Bachelors from Marymount Manhattan College and Masters from Fordham University.

The 40-year-old has also worked as a wardrobe stylist. She worked in the wardrobe department for TV productions such as Kickboxing Academy and *** and the City.

DJ Khaled, is a famous DJ and record executive, who has been successful in the music industry thanks to his wildly popular and incredible beats.

Khaled has enjoyed major recognition in recent times. The entertainer, who is also a record producer and media personality; has become extremely popular across several social media platforms and has since amassed millions of followers and millions to his bank account.

Want to know more? Keep reading and learn personal details about DJ Khaled, who his wife is, DJ Khaled success, his career, DJ Khaled net worth and a lot more.

DJ Khaled net worth timeline begins when back in the 90’s when he first gained fame as a radio host on the Miami hip hop radio station 99 Jamz.

His job at the radio station is what led the group Terror Squad to hire Khaled as their DJ.

Between 2015 and 2017, Khaled became an internet star thanks to his Snapchat videos talking about his “key to success”

He released the album “Grateful” in 2017

In 2018, he joined Demi Lovato as the opening act for her Tell Me You Love Me Tour

He released the album “Father of Asahd” in 2019

His album “Khaled Khaled” was released in 2020. 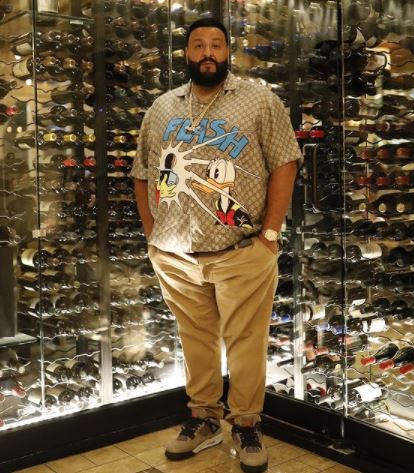 According to online sources, DJ Khaled net worth in 2021 is estimated at approximately $75 million. Between September 2017 and September 2018, DJ Khaled earned an impressive $30 million thanks to touring, producing, and, most importantly, endorsements.

DJ Khaled also earns tens of millions from endorsements with companies like Weight Watchers, T-Mobile Ciroc, and Apple.
He is one of the highest-paid people in hip-hop and his money doesn’t actually have that much to do with hip-hop or even music in general.

In response to the coronavirus outbreak, Khaled and his son recorded a handwashing song in partnership with Dove Men+Care. 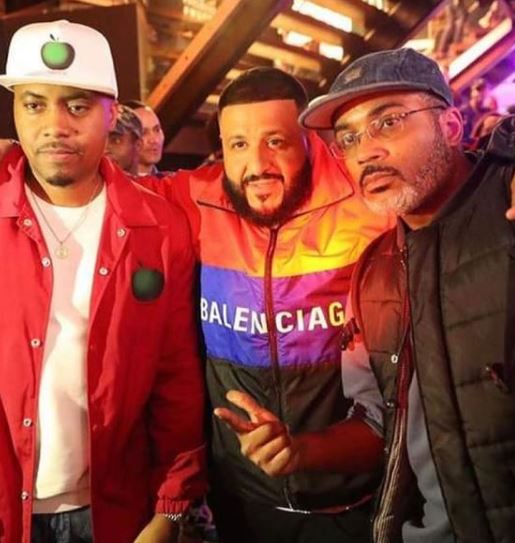 Khaled wrote the book “The Keys” which made the New York Times Best Seller list. The book includes his opinions on success, recounts life stories, and describes contributions from other musicians.

In 2020 it was announced that Khaled partnered with CBD manufacturer Endexx Corporation to create a brand of hemp-derived products.

We are excited to announce our partnership with DJ Khaled,” Endexx Corporation CEO Todd Davis added. “Khaled’s knowledge and passion for CBD is bountiful, and we realized we are aligned in our approach towards product quality and business acumen. We understand and share the values that a brand goes beyond physical products; it needs to help people feel good about themselves and be part of a day-to-day lifestyle.”

In January 2017, Khaled purchased Robbie Williams’s former house in Mulholland Estates, a gated community in Los Angeles for $9.9 million. He sold this home in April 2021 for $12.5 million, $1.5 million over his original asking price! 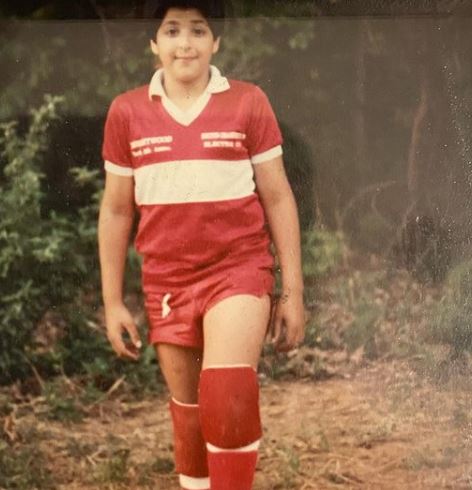 Khaled Mohamed Khaled was born on November 26, 1975, in New Orleans, Louisiana. His parents were both Palestinian and immigrated to the United States. Not only that, but they were also musicians, which is why Khaled developed an early passion for it.

Despite his parents mainly playing Arabic music, DJ Khaled developed an early passion for rap and soul.
His parents supported his newfound passion, and he went on to work at a local Merry-Go-Round store. His job here laid the foundation for his eventual music career.

One of Khaled’s first jobs was at the Odyssey record store in New Orleans. There, he met several up-and-coming artists and acquainted them before their breakthroughs. Some of these artists include Birdman, Mavado, and even Lil Wayne. 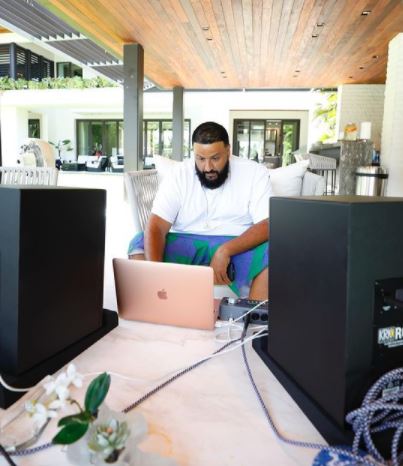 In the early 1990s, DJ Khaled would mainly DJ in reggae sound clashes. During these clashes, he’d mix dancehall with hip-hop. His first radio gig was actually on a pirate station. But once he got his feet wet, he eventually moved to Miami and co-hosted “The Luke Show.”

With building momentum, DJ Khaled finally released his debut album, “Listennn…” Koch Record released the album and soon after it premiered on the US Billboard 200 chart at number 12. DJ Khaled has since gone on to produce the following albums: Listennn… the Album, We the Best, We Global, Victory, We the Best Forever, Kiss the Ring, Suffering from Success, I Changed a Lot, Major Key, Grateful and Father of Asahd.

In 2017, DJ Khaled exploded in popularity thanks to his wacky posts on Snapchat. He became famous for sharing his “major key alerts” with fans: pieces of advice he felt were crucial to success. His entertaining personality combined with his charisma took the world by storm and also gave Snapchat a ton of free publicity. 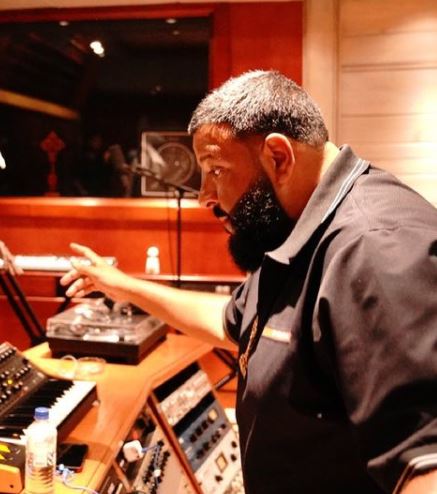 In 2018, he joined Demi Lovato as the opening act for her Tell Me You Love Me Tour, which kicked off in San Diego, California in February 2018 and ran through July 2018.

On May 21, 2019, DJ Khaled shared a new video for “Wish Wish,” featuring Cardi B and 21 Savage.
Directed by Khaled and Eif Rivera, the clip features lots of explosions, fire, and motocross riders, which looks like a B-level early-2000s street-racing movie raced into production to capitalize on the success of the first Fast and The Furious.

DJ Khaled is a record producer, radio personality, rapper, DJ, and record label executive. Since coming on to the scene as a premier record executive, DJ Khaled has won the following awards: 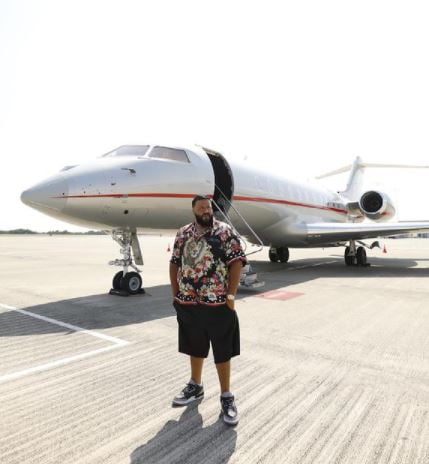 In addition to his music career, Khaled is also president of the record label ‘Def Jam South’ and CEO and founder of ‘We the Best Music Group.’ 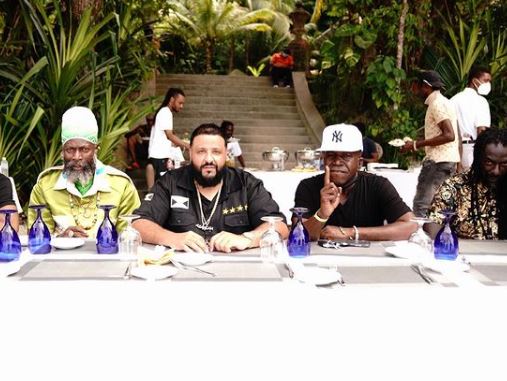 In addition to acting and writing, he has participated in the entertainment world and various other ways including hosting and master of ceremonies duties as well as sitting down for interviews to promote his curated albums or just to be in discussions about the world of hip-hop.

Inspired by his own home and lifestyle, he designed a new luxury furniture line ‘We the Best Home’ and launched it in 2018.

DJ Khaled is happily married to Nicole Tuck. The two dated for several years and she was often refereed to as his “longtime fiancee.”
The couple has been seen next to each other in numerous red carpet events. 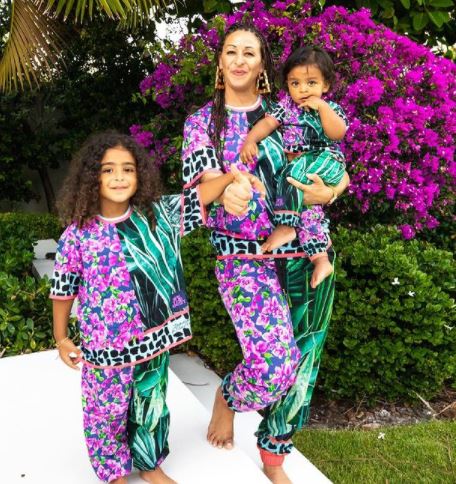 Tuck was born on December 7, 1975, in the New Rochelle suburb of New York City, the oldest of three children for Pauline Vitale and Elwood Tuck. According to her LinkedIn profile, she attended Marymount Manhattan College for a Bachelor’s degree in Fine Arts, then earned her Master’s in Education from Fordham University in 2005.
She has a sister, Freshie and sadly she lost her brother, John, in February 2018.

Nicole is also a businesswoman, she created ABU Apparel, which stands for “Always Be You.” However it seems the brand is no longer in operation. 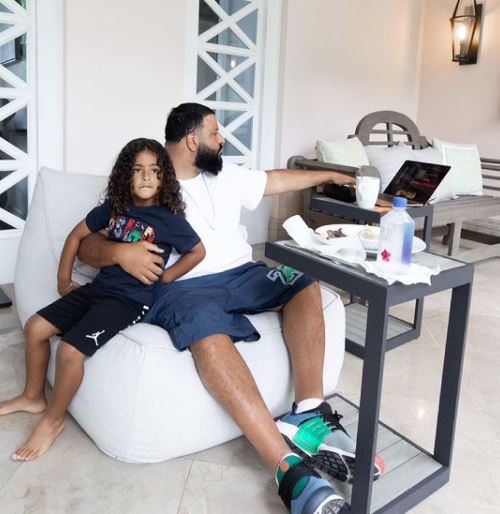 Khaled and his wife Nicole Tuck have two children; son Asahd Tuck Khaled was born on October 23, 2016. Khaled garnered attention after streaming the birth live on his Snapchat account.
On January 20, 2020, Tuck gave birth to their second son, Alam.

Dj Khaled owns several luxury cars, he is specially fond of the Rolls Royce Phantom cars for which he has spent a whopping $1.2 million. 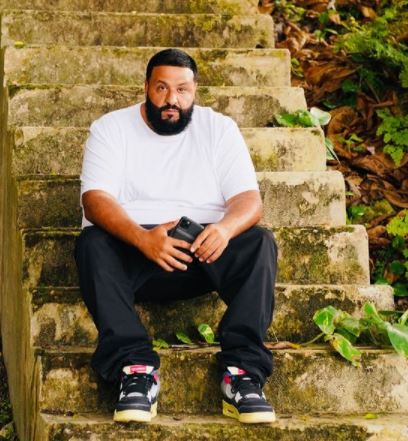 DJ Khaled has spoken widely sharing his wisdom about what led him to success. Notable lessons we can learn from DJ Khaled sure are many, our favorite include:

Don’t ever play yourself – One of DJ Khaled’s signature phrases. You can hear him say it in many of his songs. When he says this, he intends to warn us to avoid self-sabotage. “Don’t do anything foolish to compromise your joy and prosperity.”

Reject the naysayers – DJ Khaled often refers to the people who want to see him fail as “They.” He constantly warns about them. That they will try to deter you from your goals, bring you down when things are going in your favor.

Nothing in life is free – DJ Khaled built his empire from nothing. All he had was his charisma, talent, and connections. While we continue to work hard enough to replicate the type of success DJ Khaled has seen in his career, keep this in mind.

Some of our favorite quotes from the prominent DJ, include

“There will be road blocks but we will overcome it.”

“I can deal with everything. I got the answer for anything. This DJ Khaled.”

“Congratulations, you played yourself.”

“My fans expect me to be greater and keep being great.”

“They will try to close the door on you, just open it.”

What does DJ Khaled do now?

DJ Khaled is continuously working on new and innovative projects including his music. He keeps his fans updated throughout his different media channels.

Where can I find DJ Khaled on social media?

DJ Khaled is active on most popular social media platforms including

DJ Khaled is active on Instagram where he has over 23 million followers.

DJ Khaled is active on Twitter where he has 5.2 million followers.

DJ Khaled has his own YouTube channel. He currently has 10.8M subscribers.

DJ Khaled can also be found on Facebook with 18 million followers.