Danny Cotton has been identified as the flight passenger who flew head to toe covered over the Coronavirus outbreak in Asia.

Danny or Daniel Cotton who works for WorldstarHipHop, the leading platform for urban entertainment; said he was not taking any chances and shared a photo of himself wearing a bodysuit and mask.

But the back story goes a little more serious for Danny who had to leave his fiancee behind as he made his way back to Los Angeles. Danny who took a flight from Tokyo to Los Angeles; actually put himself and his fiancee in quarantine at a rented Airbnb in Malaysia for 20 days because he had been in hot spots in Asia last month including Hong Kong.
After the self imposed isolation he and fiance turned out to be fine. They apparently were on a fruit and garlic diet. However as they were making their way back to they US, his girlfriend who is Chinese, had to stay behind because she can’t get a U.S. visa due to the outbreak. In the end she had to return to China. And according to TMZ, no good news for the couple who was told the fiancee may have to wait for a visa for over two years. 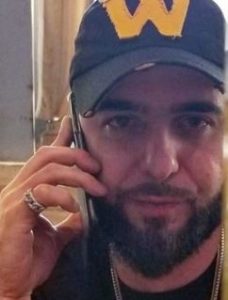 Getting back to Danny’s bodysuit, he spent the entirety of his flight, around 14 hours wearing it in order not to catch the coronavirus.

Danny Cotton who is employed by Worldstar; has been pictured attending the BET Hip Hop Awards in the past. He is also on social media with a Facebook and VK account.
WorldStarHipHop.com, is the world’s most successful urban entertainment website founded by the once-homeless Lee “Q” O’Denat. Is not clear when Danny began working for WorldstarHipHop but he currently serves as Director of Operations and A&R. Cotton’s professional LinkedIn says he is based in Hong Kong.