Jeremy Garnier has been named as the fella who had the not so brilliant idea of dressing up like the joker and then filmed himself making threats.

Garnier is said to have done the Batman’s character makeup only to live-streamed himself as he threatened to bomb and kill people. For the safety of University City and those living close by Garnier in Delmar Boulevard, the deranged man has been arrested. Reports say he was charged Tuesday with making a terrorist threat, a felony.

Jeremy Garnier allegedly dressed up as the joker and made his way at the Blueberry Hill bar/restaurant on Delmar where he was reported to have made threats. Someone reported to police that Garnier was making threats using his Facebook Live app.
Garnier who can be found on Facebook as Jeremy Joseph Garnier, posted a nearly hour long video to his profile. During the live stream a man dressed as the Joker talking to the camera in a bedroom where he is putting on a costume, can be seen. The video also shows him driving in his car, smoking a pipe and going to the St. Louis Galleria, where he’s stopped by security and asked to leave. Garnier then decides to go to the Delmar Loop, all the while he talks about ending the country’s opioid epidemic. Finally in the video, he is seen entering Blueberry Hill. A few minutes after wondering around, telling the camera he is going to kill a bunch of people and ordering a sprite; he is arrested.
Garnier can be heard saying near the end of the video “I’m not armed and I weigh 150 pounds,” “I don’t have no weapons on me. I’m not going to do nothing. You’ve got me messed up. Except all these bombs.” 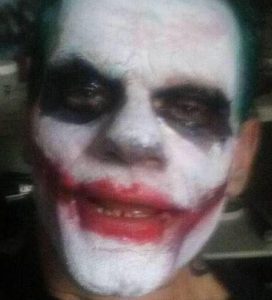 Jeremy who also calls himself ‘Jeremy jdubb Garnier’ -writes on his Facebook bio ‘I’m undefinable, unimaginable,I can not categorize who or what I am. I’m complex yet simple. I’m Slum’

According to his social media, he lives in St. Louis and studied at Lewis and Clark Community College from 2017 until 2019. He also appears to be in a relationship with Lisa Garnier and lists himself as the manager of UNCLE DUBB.
Interestingly, the Facebook page for UNCLE DUBB -could offer an explanation for Garnier’s recent antics. On the page he writes ‘Uncle Dubb is the stage name of Jeremy Garnier, I’m a multi media artist intent on ending the epidemic of opiate abuse and overdose. please follow me as I journey thru life as a bi-polar manic depressive pot head in search of my soulmate…….’

The 51-year-old is being held without bail.