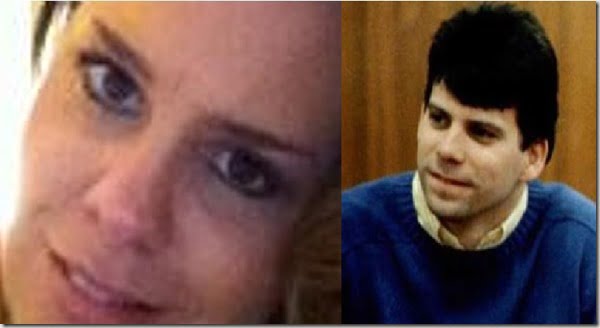 Pin44-year-old Rebecca Sneed the wife of murder convict Lyle Menendez, allegedly wants to get a divorce after finding out her husband of 11-years is living a double life as a gay man in prison! You would think the first sign to get a divorce (or even to get near him!) is that he –along with his younger brother –is serving life in jail for having killed his parents in 1989.

Convict-turned-author Eugene L. Weems has revealed to The National Enquirer that Menendez is allegedly living a double life in prison as a gay man!

According to Weems –who was in the midst of collaborating with Menendez for a book –Lyle’s alleged boyfriend in California’s Mule Creek State Prison is an ex-gang member named Chino. He stands at 5-foot-8 and is a “handsome Hispanic man with an athletic build.” 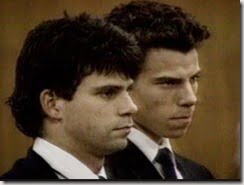 The former inmate also said no one is more shocked than Menendez wife, Rebecca Sneed, who Weems claimed “was hysterical – she didn’t know he was gay!

Rebecca Sneed became the second Mrs Lyle Menendez after years of prison correspondence with the killer. At the time she was described as a magazine editor from Sacramento, but has since become an attorney.

Rebecca and Lyle tied the knot in November 2003. He had been previously married to longtime pen pal Anna Eriksson, a former model; the two were divorced on April 1, 2001 after Anna discovered Lyle was “cheating” on her by writing to another woman.

At the time of the nuptials Rebecca was 33-years-old and Lyle was 35 when he re-married. The ceremony was held in a maximum security visiting area of Mule Creek State Prison.

Lyle and Rebecca had reportedly known each other for approximately 10 years prior to their engagement; she is also known as Rebecca Lynn Menendez. According to online info she attended Lincoln Law School where she received her Bachelor of Arts (B.A.), English.

She received her Doctor of Law (J.D.) from Kean University. She is an attorney at Powers and Miller where she has worked for the past 5 years.

Unlike his brother Erik, Lyle Menendez has remained largely quiet while serving his life sentence. He is an inmate at the Mule Creek State Prison, in Ione, California. According to a 2012 People magazine article, Menendez spends time lifting weights, playing basketball and caring for his pet lizard.

What would you do if you were Rebecca?

You can fin heron LinkedIn here.