Tyronesha Laws is the woman who was assaulted during one of rapper DaBaby’s performances.

Tyronesha was eager to attend and exicted to witness one of the hottest rappers in town but things quickly took a turn for the worst. She was left with pain and embarrasment.

The incident went down on March 7, when DaBaby was making his way through a crowd ahead of a performance in Tampa, Florida; all of the sudden he was caught on camera striking a woman in the face. The 28-year-old apologized but Tyronesha says he wasn’t sincere. 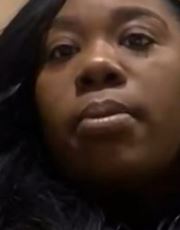 According to Tyronesha, she was stading next to a woman who grabbed her phone and flashed the rapper, she claims that it was then that DaBaby assaulted her.
After the incident she woke up with a terrible headache. As a result, she went down to the hospital and was diagnosed with a contusion to her cheekbone. Mrs. Laws who is said to have hired a lawyer, told TMZ

“I was embarrassed. I had people calling me, writing me on Instagram through fake pages, people seeing me at my job like, ‘You’re the girl that got slapped.’ It’s embarrassing. My daughter wakes up in the middle of the night crying over hearing me on the phone with my lawyer talking about the situation.”

Born Jonathan Kirk on December 22, 1991 in Cleveland, Ohio but raised in North Carolina; he began rapping around 2014. The following year he released his debut mixtape titled, NonFiction -which gained over 10k streams with no promotion.
DaBaby released the mixtape Billion Dollar Baby in 2017. He is known for the singles “Suge,” “Baby Jesus,” “Today,” and “Up The Street.”

Reports say, DaBaby offered Tyronesha Laws to have her fly out to meet him in person.