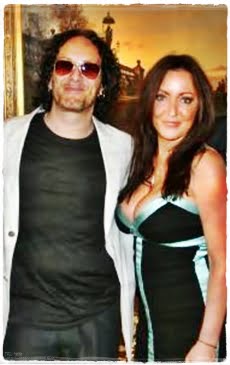 Catlin Phaneuf has been identified as the woman who seems to hold Def Leppard famous guitarist Vivian Campbell’s heart. The couple was first spotted in 2010; when, a still married Campbell and Phaneuf attended the wedding of lead guitarist Phil Collen looking suspiciously loving to each other. But it wasn’t until just a few months that the 50 year old Irish filed for divorce from his wife of 20 something years to be with Caitlin. Caitlin B. Phaneuf was born July 06, 1979 in MA. She lived in Hudson, New Hampshire but it is believed she resides in L.A.  Is not sure when the 33-year-old and Campbell 50, began having a closer relationship but they met in 2007 when she was a rep for the band’s tour that year. When last November  Caitlin’s boyfriend made headlines upon announcing his split after two daughters and 25 years of marriage, Phaneuf was identified as a crew member of Def Leppard but she has also worked with other bands and some of her credits include: Assistant to the production manager for Def Leppards’ 2008 tour, Dancing with the Stars Tour ’08/’09 – Production Coordinator, The Eagles ’09 – Production Coordinator, Def Leppard ’09 – Production Coordinator and Assistant tour manager for The Eagles’ 2010 tour.

Phaneuf is a passionate pet lover and is down to help the LA North Central Animal Shelter whenever she can; she recently posted on Facebook urging everybody to donate to their local shelter food, treats, old blankets, towels, time, foster, adopt, rescue, transport, etc….

The couple has not been very public with their relationship and seem to keep things private but an excited and obviously in love Campbell posted on his Facebook page just a couple of days after he filed for divorce:

“For the past 4 weeks the woman I love has been working in Europe with another band with a big cat name. I’ve missed her so much and it’s been total and utter [expletive] with her being gone for so long.”

Referring to Caitling who at the time was working with Steel Panther, a Los Angeles 1980s-style rock and metal group.

Caitlin’s beau is making the headlines once again but this time on a sadder note; he has been diagnosed with Hodgkin’s lymphoma and has been receiving treatment for the past 2 months. Despite the diagnosis, Campbell says he plans to hit the road with Def Leppard this summer for a tour that starts June 21st.

We wish him a fast recovery.
You can see Vivian Campbell’s beautiful blue eye girlfriend Caitlin Phaneuf on Facebook here.