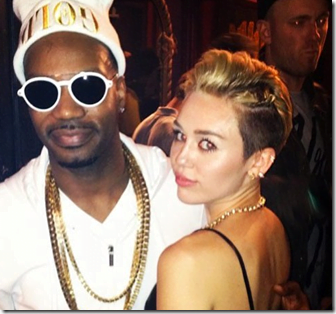 Well well well, who would have imagined! Miley Cyrus seems determined to show her ********* grown up attitude, it seems Miley is really inspired these days twirking it all over that is! During the weekend audience expecting to see Juicy J in concert at The House of Blues in Los Angeles got a little more than they thought!

Miley Cyrus was watching Juicy J’s performance on June 8 with Wiz Khalifa and Amber Rose when they allegedly pushed her on stage; as she hopped up on, Miley began twerking it to Juicy J’s “Bandz A Make Her Dance.” Everyone went wild as she gave the audience more than an eyeful of her twerking skills!

And Miley also shared on twitter her improv performance saying

“@wizkhalifa @DaRealAmberRose thanks for pushing my a*s on stage tonight. That was toooo much fun @therealjuicyj.”

Have you seen Miley twerking??? Luckily for you we have the whole footage! And by the way that’s like a complete workout!! But just for your information she is practically a pro! The “we can’t stop singer” has been twerking since March, when she shared a video of herself showing us how its done to J.Dash’s song “WOP.”

The 20 year old long legged singer who’s new singles goes “To my homegirls here with the big butts, Shaking it like we at a strip club” revealed on June 4th while she stopped by On air with R. Seacrest how she learned to move her booty like that:

“I shot a film in New Orleans where that’s where it began was I got obsessed with sissy bouncing an it turned out I got kind of good at it and now I just can’t stop!”

I guess homegirl Miley has opted for a more hip hop kind of vibe huh!

See for yourself what we are talking about and don’t miss the video!