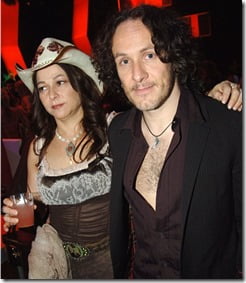 Julie Campbell is once again single! After 25 years when she married Def Leppard guitarist Vivian Patrick Campbell. The couple met way back in 1984 that means three years prior to their marriage. Julie and Vivian were introduced through mutual friends and said “I Do” in February, 1987 when she was 27 years old and the guitarist was 25 at the time. Five years later, he joined Def Leppard, one of the most popular 1980’s rock groups that still tours today.

Julie’s ex-husband filed for divorced on November 19 last year, according to the docs filed in Los Angeles County Superior Court the Irish musician cited irreconcilable differences! Campbell is asking for joint legal and physical custody of the couples’ girls and he’s asking the judge to deny spousal support to Julie. So much for an amicable relationship after all that time together! Vivian allegedly left his wife for a younger woman, a crew member of the band  named Caitlin Phaneuf, they were spotted attending a wedding together in 2010 and it is believed they have maintained a relationship ever since, oh well rock stars will be rock stars.

Even though that Julie and the rock guitarist were together for a long time, she was rarely seen or pictured with him therefore not much information can be found about her. Now that her ex has announced to be suffering from Hodgkin’s Lymphoma think we can get a little sympathy from her??

You can see Jewels ex-hubby post about his cancer diagnose here.