Meet lovely 22-year-old Emily Thomas, you should be paying a lot of attention to this girl, who is said to be pretty close to Hollywood actor Tom Cruise.

She is not only a bright set assistant but is also said to be his girlfriend and pretty soon his missus!

According to reports, the two have been dating since the end of 2014 and are ‘smitten.’ In fact Cruise is so head over heals for the Britton that he is ready to make her his fourth wife, RadarOnline reported.
53-year-old Tom was seen looking dashing in Vienna –allegedly for more work meetings –but outlets believe he will take the opportunity to pop the question!

Thomas hails from the UK. She and Tom met when she was assigned as his on-set assistant on the latest “Mission: Impossible” movie, and Cruise –who’s been married to Mimi Rogers, Nicole Kidman and most recently to Katie Holmes –took a liking to her almost immediately. 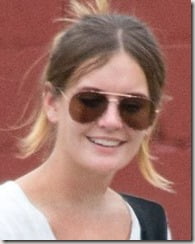 An insider said while on set, the actor was allegedly so impressed with Thomas, he wants her involved in all his upcoming projects!

Reports about Tom being flirty with a new gal first came up last November, since then Emily –who resembles Holmes –have been working closely, by closely we mean she’s been seen next to him in between takes, as if she wouldn’t want to leave his side, kind of deal.

After meeting they allegedly soon began dating and a trip abroad came. Emily went with Cruise to Morocco, where he was scouting locations for the next “M:I” movie. Other sources believe he proposed to her while in Morocco and are planning to wed in London at the end of the year.

Not much more details are known about Thomas but one thing is for sure, she must be into Scientology or else!