Pop star Cady Groves has been pointed as the other woman! The industry and fans around the world were shocked after hearing Country Music couple Blake Shelton and Miranda Lambert were calling it quits! As bummed as every single living creature was they said their divorce was amicable but apparently the other woman has something to say!

According to RadarOnline Cady let loose in a jaw-dropping Twitter rant just hours after Shelton and Lambert finalized their divorce.

In 2012 Cady talked about meeting someone, working together, being obsessed with each other; that someone happened to be married Blake. She said at the time

“I moved to L.A. to write my album… I met a producer out there who was 35 and, like, from the second we met, we were obsessed with each other. We started making the album together… We started talking about spending the rest of our lives together, looking at apartments, things like that. I literally thought I was gonna spend the rest of my life with him. We were obsessed with each other. And then, in our last writing session, he was late… There was another writer there and I was like, ‘I’m sorry, I don’t know why he’s late…’ And the other writer says, “Well, him and his wife live in Santa Monica so there’s probably traffic… 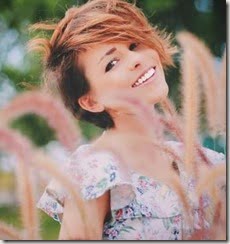 She met Blake on Twitter after they exchange tweets, after that they allegedly had a month-long affair. The now 25-year-old apparently had it, and took to twitter one more time to express her thoughts 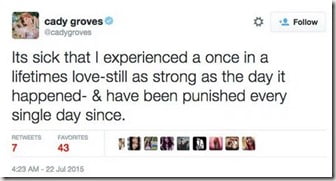 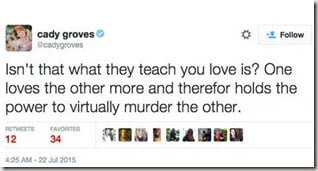 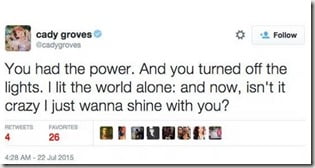 Cady grew up in Oklahoma City, OK, she is currently signed to Vel Records. When she was reached by Radar regarding the tweets she denied she was talking about Shelton.