She rose to fame for her portrayal of Helen Keller in ‘The Miracle Worker’—role that made her the recipient of an Academy Award for Best Supporting Actress at age 16. Patty became the youngest Oscar winner at the time. She had previously performed the role on Broadway.

Like many other of her peers, as she became more famous, drug and alcohol abuse were taking over her life.

Ranked #40 on TV Guide’s 50 Greatest TV Stars of All Time in 1996, Patty dedicated much of her time to educate people about mental health issues, having been diagnosed with bipolar disorder in 1982.

Patty Duke grew up in a difficult home, she and her siblings were raised by an alcoholic father and manic-depressive mother. She found an outlet in acting and went from commercials to small roles in films. Her big break came in 1959 when she was casted as Helen Keller in the Broadway version of The Miracle Worker.

Patty also starred in her own sitcom called The Patty Duke Show and after three seasons, her reign as the “Queen of TV Movies” began. Patty went on to participate in several films, including, the cult classic Valley of The Dolls. She also served as president of the Screen Actors Guild for two years in the 80’s.

Patty was married a number of times and had several relationships.

She first married producer Harry Falk. They were married from 1965 until their divorce in 1967.

In 1970 her relationship with Desi Arnaz Jr. made several headlines but it didn’t last. Patty moved on to actor John Astin and around the same time began dating, rock promoter, Michael Tell.

Michael Tell became her second husband and the biological father of her first child, son, Sean Astin. Her marriage to Michael Tell lasted only a few days and it was annulled after she claimed it was never consummated. It was said she married Tell, only to give a name to her then unborn child, because she was unsure of who the real father was.

Patty Duke reconnected with  John Astin, of The Addams Family , and made him her third husband in 1972. He adopted her son Sean, and fathered her second son, Mackenzie, who was born in 1973. The couple also ended in divorced in 1985.

The following year in 1986, she was married for the fourth and last time to, Michael Pearce, a Drill Sergeant –who met Patty after he served as a consultant during the production of A Time to Triumph. The couple moved to Idaho and became the adoptive parents of one son, Kevin.

Mike Pearce later became a firefighter, they remained married until her death.

Patty gave birth to two sons, Sean and Mackenzie Astin and was also the mother of adoptive son, Kevin Pearce.

Actor, Sean Astin was born on February 25, 1971. We know him from his role of Samwise Gamgee in The Lord of the Rings trilogy.

After much speculation, he took a paternity test to discover who his real father was. The results revealed he was the son of Patty and Michael Tell, her mother’s second husband.

Sean Astin is married to film producer Christine Harrell and is the father of three daughters, actress Alexandra “Ali” Astin and her sisters Elizabeth and Isabella.

Mackenzie Alexander Astin was born May 12, 1973. Also an actor, is the second son of Patty Duke with husband, John Astin. He is married to Jennifer Abbott Astin. 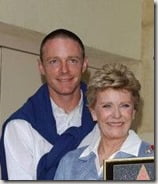 Kevin Pearce was born in 1988. He is the adoptive son of Patty Duke and her fourth husband, Mike Pearce. Kevin is currently engaged to his fiancee, Jenn. 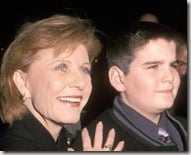 The iconic actress also wrote an autobiography titled, Call Me Anna  -which was made into a movie; and a second book, A Brilliant Madness: Living with Manic Depression Illness, was published in 1992