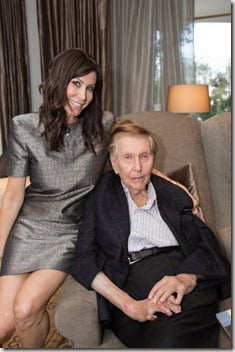 90-year-old billionaire Sumner Redstone is going to be a daddy as his girlfriend, Sydney Holland, is adopting a baby girl. She confirmed the news saying:

“I recently adopted a baby on my own, and I am very excited to experience both the joys and challenges of motherhood.”

A spokesperson for Viacom said that “Mr. Redstone doesn’t have any involvement with this child”, but a source close to the couple says the little girl is named Alexandra Red, which was shortened from Redstone.

“They cut the last name on purpose so the media doesn’t find out,” says a source close to the pair. “They are not telling anyone.”

42-year-old Sydney Holland, who is almost 50 years younger than her boyfriend, has been dating Redstone for about three years.

The nonagenarian is reportedly worth $4.7 billion, making him Forbes’ 91st richest person in the world. He has been married twice before, first to Phyllis Gloria for 50 years and then to Paula Fortunato for seven years. Redstone has two grown children, 59-year-old Shari, and 62-year-old Brent, making baby Alexandra his third child.

Sydney Holland used to work in the L.A. fashion industry. Since 2011, she runs a boutique TV and media company based in Beverly Hills called Rich Hippie Productions, a production company that focuses on creating, financing and distributing entertainment content and intellectual property. Despite being self-employed, she recently expressed concerns to friends that she might not be included in the Redstone will.

In 2007, Sydney Holland launched Zooey Green, a line designer graphic tees made of 100% organic cotton. She is co-owner of the eco chic, organic apparel brand LIV GRN, which eco-conscious celebrities such as Jessica Alba, Halle Berry and Leonardo DiCaprio wear.