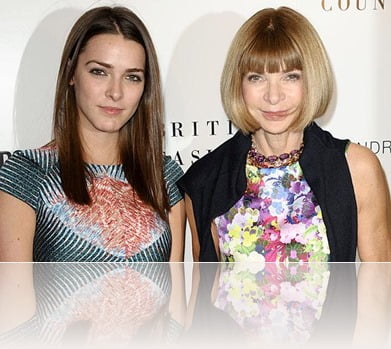 Katherine Bee Shaffer might be considered to be the luckiest girl, because her mother is Vogue’ magazine’s editor n Chief Anna Wintour she has access to the hottest fashion shops, meet the top designers, models and celebrities, not to mention she get to wear the most fashionable outfits without being a model herself, not that she doesn’t look like one, Bee is stunning!!

Katherine Shaffer also known as Bee Shaffer and her big brother Charles Shaffer are the two children Vogue’s editor in Chief Anna Wintour and he ex-husband child psychiatrist Dr. David Shaffer had during their 15-year-marriage. Bee was 12 at the time. Katherine Eleanor Shaffer was born in London on 31, 1987, Katherine who is mostly known  by her nickname Bee moved to New York with her family  where her dad worked at at children’s hospital and where her mom got her job at Vogue. In New York she attended at the Spence School and then went on to Columbia University where she received her B.A. in History in 2009; while in college Bee interned at he Weinstein Company and The Manhattan Theater Club. The New York Notebook was the column Bee Shaffer wrote for the Daily Telegraph from 2005 to 2006, the year after that she was an intern at the New York Magazine. Her fist job was at Teen Vogue as a contributor editor at the age of 17. In 2009, Bee Shaffer began working as an assistant for the Ricky Van Veen College Humor website co-founder, where Bee met her ex-boyfriend Jake Hurwitz, a comedy writer. In 2011 Bee spread her wings and landed to the left coast where she began to work for Glee’s creator Ryan Murphy. Bee and Jake split up last May after two years dating, she moved back to New York in October for a new job opportunity as a segment producer for Seth Meyers on his new NBC’s Late Night show.