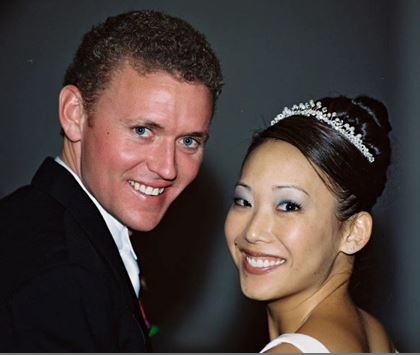 Cindy Oji and Matthew (Matt) Axelson met while they were studying at Chico State University. Matt had only two summer courses and six weeks left before he was to leave. He had a boat, and most of those six weeks were spent at Lake Oroville. Cindy said they tried to convince themselves this was just a “summer fling,” but they both knew it wasn’t.

Matt was a political science major. Cindy was getting her degree in resort and hotel management. He had talked about the possibility of someday getting into local politics, but before he could even consider that, he had a lifelong dream. His one great dream was to be a Navy SEAL.

After he graduated in 2000 and Cindy in 2002, Matt signed up for four years with the Navy, and left for boot camp. They maintained a long-distance relationship, but Matt began to worry that Cindy wouldn’t really wait for him. One night, on the phone, Cindy told him, “I’m here, and I’m here to stay.” They married on December 27, 2003.

During his years in the Navy, Petty Officer Axelson was regularly deployed, and when he was away, he and his Cindy kept in touch through phone calls and e-mails. Matt was scheduled to leave the Navy in October 2005. They would live in their beautiful little home in eastern Chico and raise the family they dreamed of.

But this lovely dream would never come true. In June of 2005, Cindy was told that her husband was missing iin action. Ten days later, she received the heartbreaking news that her husband’s bodied had been found and was on its way home. Months later, Marcus Luttrell lone survivor of the mission in which Matt had died, came to see her. He gave her a final message from “Axe”. “You stay alive,” he said, “and tell Cindy I love her.”

Since then, Cindy has changed profession, sold their house and decided to move, perhaps to San Francisco. The place where they made so many plans for the future has become much too sad a reminder of unfulfilled dreams.

You can see the story of Matthew Axelson and the fatal mission in the movie “Lone Survivor”.