Jennifer Williams is a U.S. State Department official and the first person from Trump’s camp to publicly testify against President during his impeachment hearings.

Williams is a long-standing Foreign Service Officer, most importantly she took part in the infamous call between Ukrainian President Volodymyr Zelensky, and president Trump and during which Trump asked Zelensky to investigate political rival, Joe Biden and his son Hunter.

Jennifer Williams began working in the Office of the VP in March 2019, as a special advisor on Europe and Russia. Of the call between Trump and his Ukrainian counterpart, she’s said she found to be “unusual and inappropriate.”

The Houston, Texas, native is the daughter of Brad Williams and Denise Lane Williams. Her father was a tax partner at Ernst & Young, one of largest professional service firms in the world. 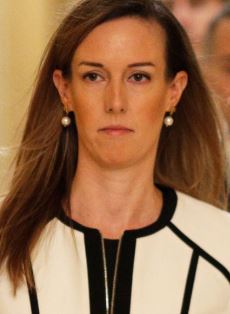 Jennifer Williams graduated from Memorial High school. She earned a B.A. in Security Studies at Georgetown University in Washington D.C. in 2005. She then continued her education attending Princeton’s Woodrow Wilson School of Public and International Affairs.

According to her LinkedIn profile, she has worked for the Foreign Service since 2006, during the presidency of George W. Bush. She previously served as a field representative for George W. Bush’s successful re-election campaign in 2004.
During President Barack Obama’s administration, Williams served in Beirut, Lebanon, and worked in the State Department in D.C. on the Syrian humanitarian crisis.

Most recently, she has spent time working in London. In 2018, while Williams was working a press officer for the U.S. Embassy in London. She was among the staffers featured in the documentary, “Inside the American Embassy.” While in London Jennifer Williams spoke to local schools about issues such as Brexit and Islamophobia.

Williams who resides in the Washington-D.C area; appears to be in a relationship and has been for a while with Douglas Alan McKewan, however she is yet to be married. McKewan is a Division Chief, J3 Civil Affairs Operations at United States Central Command – Urdu.