Alexi McCammond is a political reporter currently covering the 2020 presidential race for Axios and was the victim of a verbal attack by Charles Barkley.

The NBA Hall of Famer who insisted he was joking has since apologized and said in a statement “My comment was inappropriate and unacceptable. It was an attempted joke that wasn’t funny at all. There’s no excuse for it and I apologize”

Alexi McCammond, who is a Washington-based reporter is originally from Chicago, Illinois. She attended Guilford High School in Rockford, Illinois. 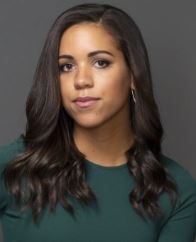 She earned a full, four-year academic scholarship to the University of Chicago, and graduated in 2015 with a bachelor’s degree in Sociology and Romance Languages & Literature.
While attending Univrsity, McCammond worked as a political reporter for almost four months at The Gate Undergraduate Political Review.
From October 2014 to June 2015, McCammond worked as a marketing and communications intern at the University of Chicago Booth School of Business. During her internship, she handled an online re-branding project and came up with social media content for various platforms. She also wrote and published weekly newsletters and global marketing materials.

According to a profile, McCammond was a digital editorial intern and a freelance political writer at Cosmopolitan magazine in 2015. Prior to Axios, she worked at Bustle for two years until 2017. Alexi reported from the DNC, the presidential debates, and President Trump’s inauguration for Bustle.

She is currently in a relationship with Rob Groulx.