According to reports, Smoke was apparently gunned down in what appears to be a home invasion robbery. He was at his pad in Hollywood Hills on Wednesday morning when two men wearing hoodies broke in.
Multiple shots were fired and Smoke was rushed to Cedars-Sinai Medical Center where he was pronounced dead. 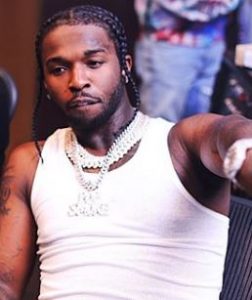 Born July 20, 1999; the Brooklyn, New York is said to have started in music almost by accident, during studio sessions with various associates in 2018.
He began turning heads and becoming a household name towards the beginning of 2019.
The 20-year-old rapper immediately cemented himself in the rap scene with viral hits called “Meet the Woo” and “Welcome to the Party.”
By the summer of 2019, he had dropped a mixtape called Meet the Woo Volume 1. Pop Smoke released his critically acclaimed second mixtape, Meet the Woo 2, earlier this month. It charted in the top 10 of the Billboard 200.
Last year he also collaborated with Nicki Minaj on a remix of his hit Welcome to the Party, and teamed up with Travis Scott on the tune Gatti. He was said to be working on a debut album to be released some time in 2020. At the time of his death, his realpopsmoke account has earned more than 1 million followers.

Pop Smoke is survived by both his parents, however he was always very vague about his romantic life.

Is not clear yet if Pop Smoke was in a current relationship with a girlfriend or if he perhaps, was too focused on becoming Canarsie’s next big star. During his brief career, he was romantically linked to Jazzyy Mulani -who is an Instagram model and influencer with over 300,000 followers. However, neither party acknowledged any relationship.