Ja’net played the Evans family’s sassy neighbor Willona Woods on the classic ’70s TV series, Good Times. According to reports, she was found unresponsive at her home in Glendale, California.

Their mother Jeannette Dubois, was known professionally as Ja’Net DuBois, Ja’net DuBois, and Ja’Net Du Bois. Throughout the 80s and 90s, Dubois worked non-stop as a TV guest on dozens of shows. As a series regular, she played Grandma Ellington on The Wayans Bros., and Mrs. Avery on The PJs.
Ja’net who also ran the Ja’net DuBois Academy of Theater Arts, received two Emmy awards for her role as Mrs. Avery on the prime-time claymation hit The PJs.
With nearly 70 credits to her name, the last film Dubois worked was the 2016 movie, She’s Got a Plan.

The multi-talented actress was married to Sajit Gupta, but the two divorced. The wedding date and the divorce date of the couple remain unclear. The pair shared at least three children altogether. Ja’net and Sajit had two daughters Rani Dubois, Yovanne Dubois and a son named Burghardt Dubois.

She is survived by her three children, son Burghardt DuBois and daughters Yovanne DuBois and Rani DuBois. 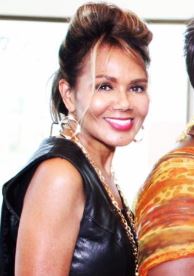 However, some reports suggest that Ja’net had another son named Raj Kristo Gupta, who died of cancer at the age of 36 in New York. According to the source, Raj Kristo Gupta was producing a training workshop on the Ja’net Dubois Academy Theater, arts, and sciences at the time of his death. He battled with cancer for almost three years.
Since Ja’net had been very private person throughout her acting career, current whereabouts of her estranged husband and kids remain unclear.
It is known however, that daughter Rani (pictured above) -briefly followed her mother into acting, appearing on “Good Times” and “What’s Happening!!”
Rani Dubois was also often pictured next to her mother attending red carpet events.